2021 Will Spell The Future For Hindutva

The 2021 elections serve as an opportunity to reach out to the two remaining parts of India where the saffron flag has not been unfurled. 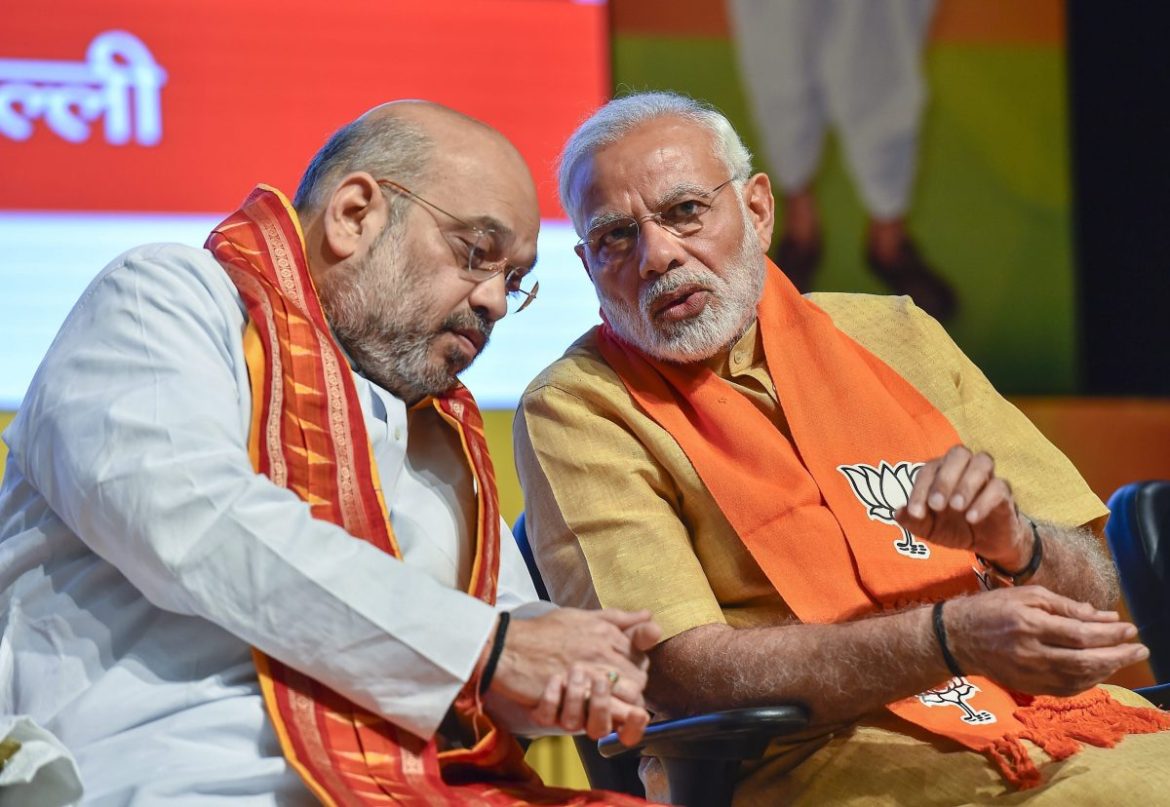 The BJP juggernaut has been on an unstoppable march since Modi-Shah took over in 2014. Having established the party well beyond the Hindi-belt in 2019 general elections and set a firm grip on the western state assemblies, the saffron-flagbearers have set their sight on southern and eastern states. It began well before the 2019 general elections but the heights to which the BJP was willing to go to capture power in these states became clear with their fiery campaign in the 2020 Hyderabad local elections. On the surface, it looks like the BJP only has ambitions of power in these states but a look at their record would suggest otherwise — for what it’s worth, 2021 state elections are a bigger and more important challenge for Hindutva politics than the 2019 general elections.

Hindutva is not just a political ideology; it is a mission. The BJP, well before Modi-Shah, has looked at elections as mandate from the people not just in terms of governing but also establishing their principles. It is best made evident by RSS joint general secretary Manmohan Vaidya’s comments after the second Modi mandate, calling 2019 elections a fight between two beliefs, “The just concluded Lok Sabha election was a fight between two different ideologies — the Hindu way of life and politics of exclusion and division. One ideology is based on the ancient integral values of holistic and all-inclusive thought process which is known worldwide as the Hindu way of life. While there was this another ideology which had non-Indian perspective and looked Bharat from divisive identities.” This statement highlights how the Hindutva movement treats elections as a metric to judge their success in convincing people of their agenda.

Hence, it is not surprising to see their campaign’s narrative not focusing on issues that parties traditionally go ahead with, like the economy or unemployment. What they instead give the voters is a picture of what India should be. To understand this one simply has to look at the elections over the past thirty years in the Hindi belt — the core issues have always been about the Ram Mandir, conversion to Christianity, Islamisation of India, attack on secularism etc. They have spoken about lack of law-and-order time and again but only till the extent of demonising Muslims.

The 2021 elections serve as an opportunity to reach out to the two remaining parts of India where the bhagwa jhanda has not been unfurled — the East and the South. Before we go ahead, though, we need to understand what drives this ambition of reaching out to every part of the country.

In order to make any change to the fundamental structure of the country, the government needs the support of literally every region of the country. For example, take the three heavily protested farm bills. Back when they were cleared, not many could have thought that it would turn into a big mess because the protests were simply limited to one pocket of the country — Punjab and Haryana. However, given the two states never got on board, the protests have now become a national issue and have been dominating headlines. This resulted in the bills being halted. What was once termed as a landmark move became a PR disaster for the government.

Another one comes from the slashing down of Article 370. Apart from international outrage there were some internal murmurs as well, particularly from the states of the north east. It required personal promise from the Home Minister to quell the rumors. Without stable partners in the region, the move could have been disastrous for the Centre..

The Hindutva movement hopes to bring in several such fundamental changes including the introduction of a uniform civil code. Even for the implementation of the NRC the states will have to be on board. They need to have everyone on the same page.

RSS has, time and again, reiterated that one of the reasons why India was defeated in the past was because it was busy in internal fighting. They understand the importance of each region and hence are keen on bringing all of them on board. What better way than to win their respective state assemblies?

Which finally brings us to the four states in question: Assam, West Bengal, Tamil Nadu and Kerala. Why have they resisted Hinduvta? What makes these four challenges unique? And what exactly do we need to look out for each state in the elections?

First, let us address some commonalities. All the four states being mentioned here have regional counterweights to the BJP, something that the northern, western or central India did not have. Second, Hindi isn’t the dominant language in any of the states; in states like Tamil Nadu and Assam, language has its own political history. Third, none of the states fall for polarisation that easily given their respective history.

We begin with Assam. The largest state of the North East and one of the key captures of the Hindutva movement in the first NDA term. The state may have a BJP government but the enactment of the CAA has prompted many to turn hostile towards them.

The protests, though, are where you understand why the state might resist Hindutva. Assam is considered as the biggest hub of Bangladeshi undocumented immigrants — and that was what drove the protests, not religion. The BJP envisioned NRC as a means to get rid of only Muslim undocumented migrants.

If they want to see this dream come true, they will need the support of the Assamese population. This election will give them a clear mandate on that. Apart from that, the state is where the Hindutva movement is strongest in the North East, second maybe to Arunachal Pradesh. If they hope to maintain their grip on the region for future changes, they will need to win the state assembly.

Next up we have Kerala. Not many expect the BJP to even come close to winning here. The state has a history of loyally switching between the LDF and the UDF. The BJP has not found a breakthrough yet, as made evident by recent elections. The fundamental reason why the state has resisted BJP rule is because of a lack of a polarisation point. The BJP has been unable to rile up the Hindu base in the state the way they managed to, say, in Karnataka. They tried to do so with Sabrimala but failed.

However, what should be noted in Kerala is the kind of shift that the BJP has shown in the past few years. Kerala is one of the few states where Christian votes can flip the election. Over the past few months, the BJP has been warming up to the church. The aim is simple, given the church has shared talking points, like Love Jihad, the party aspires to bring them under their fold. In the past, the BJP has been successful in bringing Christians to their side in Goa. What will also be interesting to watch is the kind of polarisation that the BJP whips up and how many people buy it. The state is a communist stronghold; if the BJP has to shape India in accordance to their vision, they will need the support of the Hindus of the state.

Tamil Nadu, in the last two years, has slowly become the hotseat of Hinduvta politics. Since the demise of former chief ministers J. Jayalalitha and M. Karunanidhi, the state has seen a political vacuum that MK Stalin is trying hard to fill. Tamil Nadu has been one of the key opposers for the Hindutva agenda – primarily because of the ground-work laid by Periyar E. V. Ramasamy, often called the father of Dravidian movement. It is his ideology that the BJP seeks to counter. It is not as if the state hasn’t already felt shockwaves of Hindutva earthquakes – Stalin going Hindu from atheist has been a sight to behold. On top of that, inner fighting in the AIADMK has created the breathing room that the BJP needed to grow. It is largely expected that the DMK will sweep the elections given the two-term incumbency AIADMK faces but the overall campaign should be fun to watch and will explain the penetration Hindutva has in the state.

Which brings us to the most-important elections of the season — West Bengal. Earlier a communist stronghold the state took a turn right, by electing Mamata Banerjee. However, since 2014, the state has found a new player desperate to capture power — the BJP. West Bengal was home to the Hindutva movement back in the earlier half of the 20th century. It is, after all, home to Shyama Prasad Mukherjee, founder of the BJP’s predecessor Jana Sangh. The state is currently seeing a hostile movement led by Amit Shah to capture power, having tasted blood in the 2019 general elections by winning 18 of 42 seats.

The elections here have several implications. Mamata Banerjee is the only primary opposition leader who has remained consistent with her stance when it comes to the BJP since 2014. She, unlike the BJD, the YRSCP or the TRS, has constantly opposed the government. In fact, some of the strongest speeches against the government in the house have come from TMC star Mahua Moitra.

Second is the unique identity of Bengal and the regional symbolism it carries. Bengal has a rich regional history, known for being the land of the intellectuals with Kolkata being the largest city in the East.

Third, the Bengali Muslim minority. It is one of the states where Muslim voters can not just flip a few seats, but the entire assembly. The BJP hopes to have a Hindu order, and if they want to achieve that, they need a grip over this vocal and powerful minority.

The timing of these elections makes the verdicts crucial. The BJP has not had a good run in 2020, having lost Delhi and failing to dominate the Bihar polls. Plus, they have also lost Jharkhand and Maharashtra. In any case, the campaigns will touch new highs ( or lows, depending on who you are).