Owaisi is talking about issues which affect people. 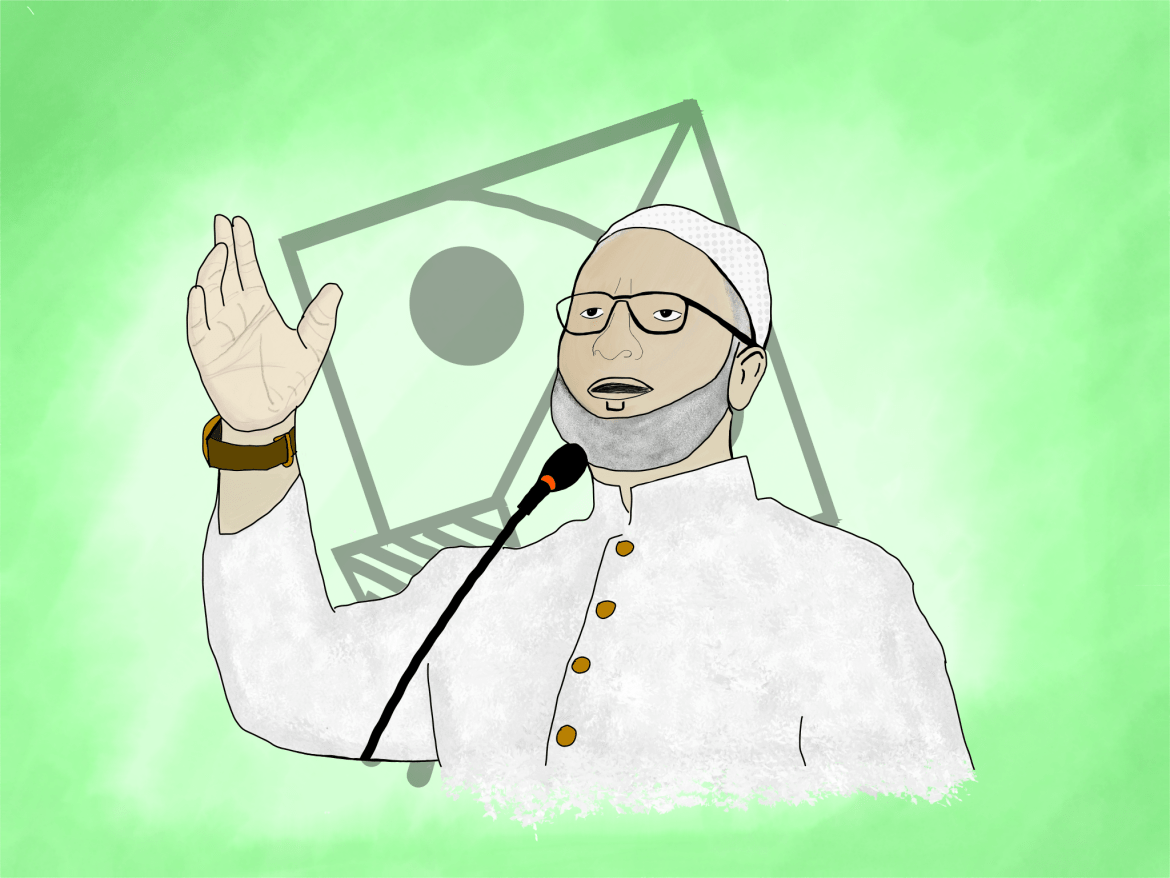 Bihar voters are known for catching experts off-guard but even this knowledge could not have prepared them for the state election results. From Nitish Kumar winning a historic fourth term to the stunning 16 seat victory of the Left, experts were proven wrong on every front. However, none of this really caught the headlines as much as the rise of the Muslim-identity party AIMIM.

Led by the firebrand orator Asaduddin Owaisi, the party less than a decade ago was confined to old-city Hyderabad, Telangana. However, after the earthquake elections of 2014 that fundamentally changed the political landscape of India, AIMIM has become one of the fastest growing parties in the country. Owaisi since then has been accused of being a vote cutter to being a potential king maker. With this level of importance being showered it is time to deduce AIMIM’s politics – for what it is worth.

Back in 1984, when the Rajiv Gandhi government brought in economic reforms what they also did was change the definition of secularism. Under both Nehru and Indira Gandhi, secularism was about keeping distance from radicals while actively tolerating religious beliefs. However, the Rajiv Gandhi administration, turned to appeasing the most radical section of a community, as made evident by the infamous Shah Bano case and the opening of locks of the then disputed site of Babri-Masjid/Ram-Temple.

What followed these events is history, a fallout of which was the creation of the ‘Muslim-vote’- a phenomenon in which a political party would convince India’s largest minority to vote as a block, guaranteeing them basic safety from Hindutva ideologues in return. With such consolidation of votes, Muslims became a voting unit which could tip the balance of power any way they wanted, prompting political parties to follow blind appeasement. It has manifested itself in ugly forms – in the 2005 Bihar state-elections, Lalu Prasad Yadav was seen with an Osama Bin Laden look-alike during his campaign in Muslim dominated areas.

While this consolidation did help Muslims in gaining political leverage in the electoral procedure, it did not do much for them in terms of advancement. Hence, while the rest of the country was reaping the benefits of economic reforms and growing industries, Muslims were reduced to a voting bank – the deposit being their individual rights and returns being security from the Sangh. Anyone who challenged this would be threatened with the possibility of having a Hindutva government in power led by the BJP.

However, in 2014 that changed. With the consolidation of Hindu-votes firmly behind the BJP, it became difficult for “secular parties” to demand unquestioned votes of the Muslim community. This emotion was best captured in a Scroll article covering the 2019 bypoll win of the AIMIM in the Muslim dominated Kishanganj seat. Local journalist Abdul Karim remarked, “Muslims would often vote strategically to keep the BJP out. But now the BJP is anyway so strong. So, what have we got to lose?” This Muslim vote, which anti-BJP parties commanded without any question, is who Owaisi is targeting.

If you have been paying attention, AIMIM now has MLAs in three states: Telangana, Maharashtra, and Bihar. A footprint that vast proves that what the party has been pitching has struck the right chord. This can be credited to more than one factor, but the primary reason is that the Indian National Congress has abandoned the Muslim voter block.

Post the disastrous run of the 2014 elections, Congress seems to have decided that it was not the incompetent dynast they fielded that cost them the elections, but the fact that they were not being Hindu enough. This conclusion was followed by a spree of temple visits, including the infamous Janeu row, where Rahul Gandhi tried to reinforce his Hindu identity. In the process, though, they went too far down this path – almost becoming ‘BJP lite’. They not only praised the construction of the Ram Mandir but also took credit for it, refused to facilitate on-ground Muslim leadership and so on. In fact, they did not even bring up Muslim issues. With the personal security no longer a core election issue, the Congress did not speak of the aspirations Muslims had, nor did they outline a vision to improve their living conditions.

Owaisi, in the form of AIMIM, brought Muslims that opportunity. One simply must look at the ideology espoused by the Bihar state president of AIMIM, Akhtarul Iman. In an interview, while talking about the politics of the party, he clarified that his goal was development. He said, “We have cadres from Muslim, Hindu and Dalit communities. Our fight is for education, food, health facility, bridges over rivers, roads and employment opportunities.” Iman even hit out at RJD saying, “It takes the votes of Muslims by showing anger on BJP or Hindutva parties but has always backstabbed Muslims when it comes to development or political sharing.”

AIMIM has emerged as an organization that is not talking about the communal identity of Muslims, but about the individual identity of a Muslim. Yes, it has supported rhetorical rants with row over issues like Bharat Mata chants and yoga but that is not all it engages with. With pseudo-secular parties, the conversation was limited to Iftar parties and a bizarre photo-op of Hindu candidates wearing skull caps. Owaisi is talking about education, taking an active stance against radicalization, and is not hesitating to call out liberal hypocrisy.

At the same time, Owaisi has, by no-means, a good record on development. A social activist, quoted in a News18 profile, had this to say – “As they say, the old city is far from development. Here, people have remained uneducated and political leaders are responsible for this. They did not even allow the metro rail here. The citizens here are used as voting machines.” Hyderabad has been an AIMIM stronghold for over 30 years. Despite Owaisi’s rants on growth of Muslims, the city of Hyderabad has the second largest poor populace in any urban place in India. The party cannot be directly held accountable for this, since it was not in power in the state, but some accountability does fall on Owaisi. Now, with AIMIM commanding seven seats in the assembly, things should have improved, but so far, no such drastic change has been advertised.

Of course, Bihar elections cannot be taken as a referendum on the work AIMIM has done but it definitely is one on pseudo-secular politics. Owaisi is talking about issues which affect people. He has promised to work for it. If at all secular parties want to get back in the race, they need to start working instead of scaring people with the idea of a BJP-led government.