Book Review: A Strategy To Repair The World In One Generation

Simon Anholt’s book is about the path he took towards the development of an index. 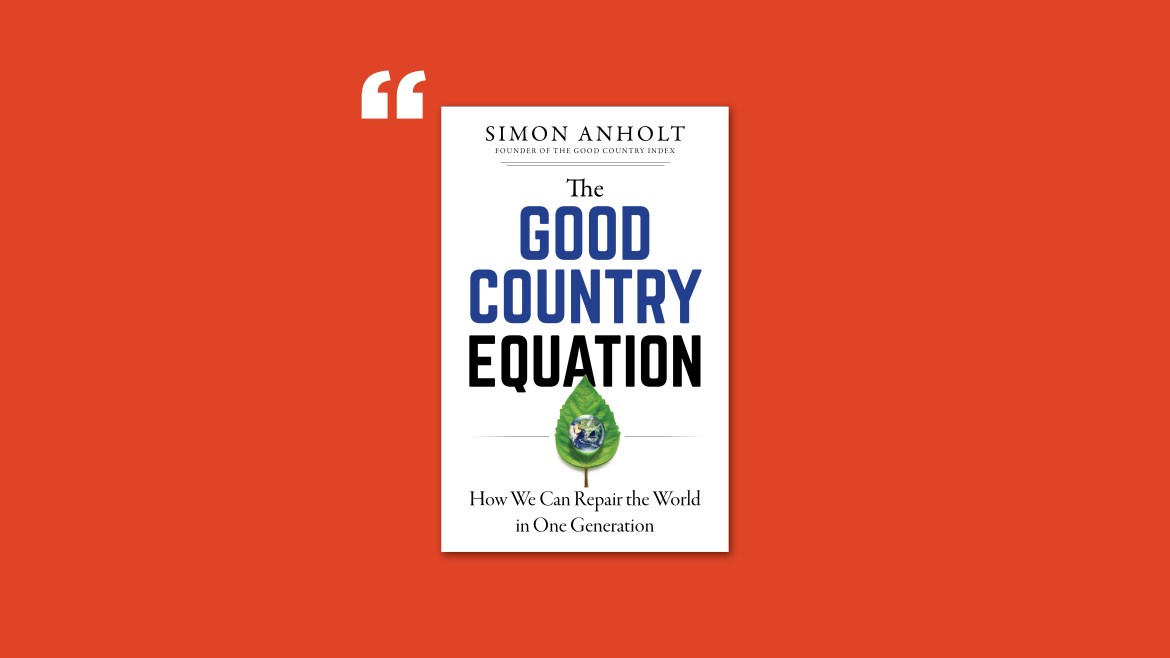 The Good Country Equation: How We Can Repair The World In One Generation by Simon Anholt | 272 pages | ₹678.99

As people born in the twentieth and twenty-first century, we have grown up trying to make sense of the chaos and the speed at which things were changing around us. Even now, with each passing day we are left to wonder if Stephen Hawking was right when he said -

“In a world that is in chaos politically, socially and environmentally, how can the human race sustain another hundred years?”

While some of us hit a dead end when faced by the question “why doesn’t the world work?”, a journey of seeking answers begins for others. Simon Anholt is one such, whose research on this topic led him to explore the idea of how nations’ perception of themselves and each other could solve this conundrum and make the world work.

Anholt is an independent policy advisor who has decades worth of experience in strategic enhancement of socio-political and economic relations between countries. He is globally acclaimed as an authority on understanding national image and as the creator of the popular terms ‘nation brand’, ‘place brand’ and ‘competitive identity’ among others.

In his book The Good Country Equation - How We Can Repair the World in One Generation, which is a result of years of research into the problem, and experience into trying to formulate a solution, Anholt opines that the reason behind why the world doesn’t work is the inward-looking policy of most countries around the world. He suggests that the problem isn’t global warming, terrorism and migration. Rather, it is the microscopic view of nations as opposed to a telescopic view, where nations collaborate than compete. He goes on to say:

“We can change the way countries behave by proving to governments that collaborating to build a better world doesn’t mean national or political self-sacrifice.”

It is his journey into drawing parallels between product images, nation images, and ‘nation brands’ which ultimately led him to creating 'Good Country Index’ – an index that can quantify what each country in the world contributes towards the common good of humanity, and what it takes away, relative to its size. This is also the journey that Anholt covers in his new book, which in my opinion will prove to be seminal in world politics.

The Good Country Equation is a narrative of two storylines, inevitably taking the reader on an adventure that criss-crosses and overlaps before finally culminating into the bigger picture. Anholt casually takes on deep academic discussions and blends them into a travelogue that immediately strikes a chord with the reader. He uses common examples to elaborate complex thoughts, which makes it easier to grasp the concepts presented.

He describes his realisation about how a country’s ‘national image’ based on humanitarian grounds can act as an incentive for governments to join hands and combat global challenges together. His essay on the same topic, which was published earlier, resulted in many Heads of State approaching him for advice on how to build their ‘nation brand.’

At this stage that he proclaims that selling one’s nation is not the motive of a nation brand, which focuses more on the deeds of a country towards humanity, inevitably building their reputation.

“Bragging about your own country, which is what governments so often end up doing, is like a standup comedian who goes onstage and tells the audience how funny he or she is. Don’t tell them to laugh. Be funny. And likewise, for countries: Don’t tell them to admire you. Be admirable.”

Anholt proceeds to give his readers a glimpse of the approaches undertaken by different regions towards this goal. His questions about what one’s country stands for, be it Slovenia building their image by lending to neighbouring countries, or Bhutan seeking its identity with the Gross National Happiness. He even talks about unique strategies such as ‘victim to leader’ which he invented to combat an existing negative image in countries like Mexico.

An Insight Into History, Culture And Lives

Simon Anholt not only shares what went on in the several hundred closed room meetings he attended but also shares his experience visiting several countries, thus helping his audience picture the set up better. As a fellow Tintin lover, I loved the parallel he drew between the two flight journeys to the Himalayas, consequently easing the reader's mind into the heavy policy-based content which was to follow. The effort he has taken to authentically represent every culture just as he experienced them can be seen especially in his views on Mexico and Chile. In cases such as Latvia, his time of travel coincides with important events of modern history, therefore making his travelogue a piece of important evidence to understand the ground reality and the sentiment of natives in these countries.

On a lighter note, he even shares the characteristic traits of several Presidents and Prime Ministers outside work, hence serving as the perfect reminder to us that they too are humans who we have elected to power. He even compares some of their working styles which can be interesting for those aspiring to work with leaders in the future.

Simon Anholt’s book is about the path he took towards the development of an index.

This can serve as a lesson and an inspiration for students and academics alike since it is the story of a very successful research initiative. He describes in detail the approaches he took for going from various observations to their respective conclusions. His story of developing several models such as the MARSS, and several indices such as the Nation Brand Index and the sheer number of samples collected before coming up with the ‘Good Country Index’ gives readers an idea of what it takes to create a new measure, especially one as vast as the Good Country Index.

His humility, curiosity and attitude as a researcher are attributes which young researchers will be inspired by. The book is a must-read for anyone; more so for millennials and zoomers, who are impatient to outperform the previous generation and make a lasting impact on the world around them.

Malavika Kannan is a student of politics at the University of British Columbia – Sciences Po. She is passionate about political affairs and political history.