Book Review: Behind The Scenes Of One Of The Biggest Events In China's History

This book is an essential read for anyone interested in China. 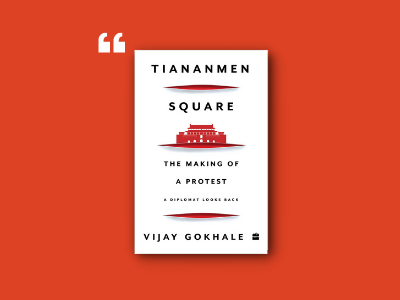 Tiananmen Square: The Making of a Protest by Ambassador Vijay Gokhale is an Indian perspective on the build-up to the much discussed ‘Tiananmen Square’ incident of 1989 in China. Much has been written & discussed on the brutality of the People’s Liberation Army and the Chinese Communist Party. Vijay Gokhale was posted as an official at the Indian Embassy in Beijing, China at that time and has presented the sequence of events as they unfolded based on his first hand experience. He gives the historical context of the major players who were involved or may have been a trigger to this incident and explains the internal politics and functioning of the Communist Party of China. This book is an essential read for anyone interested in China because of the following five reasons :

Firstly, Amb. Gokhale has written the book based on what he personally saw and his analysis of events that unfolded in the decade of 80's, when Deng Xiaoping became the core leader of the Chinese Communist Party. His reading of the events are based on the discussions in the Indian embassy then and personal interactions with the students and the local population out in the streets. Most documentaries, books and articles on the Tiananmen Square incident provide a western point of view. This book is a fresh attempt to look at the same events from a differing prescriptive. Although Vijay Gokhale does not prescribe motives to the key actors, he  does not absolve them of the brutality they committed either.

Secondly, the book gives a ring-side view of the individuals, institutionts and authorities who play a key role in the affairs of the Chinese nation. Unlike how one would imagine based on media reports that there is friction among the major pillars of the CCP, and often contrary views are presented and even promoted, but the allegiance to the CCP is foremost and all activities are to deepen the rule of the Party in China.

Thirdly, Deng Xiaoping comes out as a masterly figure in the book who brought China out of the misery and poverty thrusted upon by Mao. While strengthening the hold of the CCP over China was his prime motive but he brought in the prosperity that would make China a global power in next two decades. His famous words, "It does not matter if it is a yellow cat or a black cat as long as it catches mice" and his advice "Observe Calmly; secure our position; cope with affairs calmly; hide our capacities and bide our time; be good at maintaining a low profile; and never claim leadership" laid the foundation for China’s approach to the world in the coming decades.

Fourthly, the book is very critical and shows in detail how foreign press "peddled rumor" and drove their agenda during the incident. The author mentions a study that analysed the reporting of the US-based media at the time and says, "in retrospect, media built up public expectations that the movement would succeed." He points out that the media played a role in enforcing view in embassies that there was a friction between the PLA and the Party and possibility of a revolt. At one point the author writes about foreign media that, "what was being read outside China was entirely one sided and often based on a mixture of fact and fiction." The same foreign press which was in 1989, "self appointed guardian of democracy and human rights in the world", in no time turned coats and was publishing what the Chinese wanted them to print.

Lastly, the Chinese Communist Party is celebrating its centenary this year i.e. 2021. This book is an important contribution to understand what the rise of CCP and China mean to the world. They deceived most of the world for the period between 1990–2012 before Xi Jinping took over and clarified in his recent speech at the centenary celebrations their intentions "any external attempts to subjugate the country would result in heads bashed bloody against a Great Wall of steel."