The prolonged absence of dialogue on the subject bears the potential to drastically impede the effectiveness of the Indian Military. 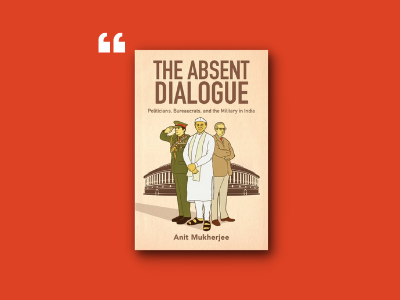 The Absent Dialogue: Politicians, Bureaucrats, and the Military in India by Anit Mukherjee| 336 pages | ₹760 (Hardcover)

India is the outlier.

Whilst many a democracy in its neighborhood have succumbed to military coups, Indian democracy remains unscathed. Although the maturity of the country's democracy—"one wherein civilian control has been strong and military establishments have focused on external defence"— is a commendable achievement, one can't help but question its impact on the effectiveness of the Indian military.

What is the nature of the interaction between India's democracy and military? Has the country really arrived at that positive-sum game, that equilibrium at which the state can exercise undiluted civilian control and ensure the effectiveness of its military? Are we there?

These are the questions Anit Mukherjee, an ex-serviceman and Assistant Professor at The S. Rajaratnam School of International Studies, unpacks in his book The Absent Dialogue: Politicians, Bureaucrats, and the Military in India.

He suggests that, in effect, the relation between the Indian military and civilians is punctuated by an absent dialogue. A lack of cooperation. A dysfunctional pattern of defence administration; one wherein the prime stakeholders of national security—the polity, the military, and the bureaucracy—operate in distinct silos. A pattern riddled by an absence of well-informed communication. A pattern that is, ultimately, detrimental to the effectiveness of the Indian military.

The Present: A continuation of the Past

Professor Mukherjee begins by revisiting history and sheds light on the 'unequal dialogue' perpetuating Indian civil-military relations. He notes the transition of the country's preference for Huntington's Objective Control theory (the politician sets the executive, the soldier plays the executioner) into a determination to maintain the military as subservient to political authority. A condition that prevails today.

From Nehru's political insecurities translating into prejudiced and neglectful interactions with the military to Rajiv Gandhi and Vajpayee's missed opportunities at drastic reforms — Prof. Mukherjee uses history to intricately divulge the principal reasons for an 'unequal dialogue'.

He, consequently, arrives at a sulking military (unhappy over its marginalisation yet determined on maintaining its autonomy), crushing bureaucratic control (one that lacks considerable expertise) and disinterested polity (due to the military's low salience in electoral politics).

The author also claims that a lack of existential threats allowed this unequal dialogue to persist till today. However, China's increased belligerence vis-à-vis their Belt and Road Initiative and military build-up in the South China Sea makes the aforementioned idea quite debatable.

The Facets of Effectiveness

In particular, the criterion of jointness, or inter-service cooperation, intricately exposes the ‘absent dialogue’ by amplifying a reticence for altering the status quo amidst all stakeholders. "Civilians are comfortable with the higher defense management structure, without the need for a CDS." The Chief of Defence Staff is responsible for coordinating, in long-term the three defence wings: the Army, the Air Force and the Navy. "The military is content paying lip service to jointness and enjoys the single service approach", he writes.

This critique showcases both the absence of an impetus for change, reform and jointness within the Indian military, and a purposeful disregard for tackling the crisis within civilian structures. The prolonged absence of dialogue on the subject bears the potential to drastically impede the effectiveness of the Indian Military.

Since the book's publication in 2019, however, the government has in fact appointed a CDS and divided the Ministry of Defence into two bureaus: the Department of Military Affairs and the Department of Defence. The author’s ideas, though, still maintain their pertinence. Despite this attempt at fostering jointmanship, there is significant skepticism surrounding the efficacy of this new office.

For instance, the dual advisory role of the CDS and the three chiefs of the Army, the Air Force and the Navy seems incompatible with the proposed notion of jointness. It would, instead, emerge prudent to position the CDS as the “the single commander” exercising final say over the three chiefs’ differing opinions.

Moreover, the cooperation of the bureaucracy in facilitating the stabilisation of this new office—to better integrate the armed forces and expand the CDS's advisory role to the government—is yet to be assessed. It is only after such assessments that the true nature of civil-military relations, and their consequent impact on the jointness of the Indian military, can be evaluated.

With raging geopolitical tensions in its south-Asian neighborhood, India has never faced a greater necessity to exercise efficient military capabilities. The Absent Dialogue, for these reasons, treads uncharted territory by acknowledging a series of intertwined problems plaguing the Indian military's effectiveness.

It envisages the development and effective engagement that accompanies lightened egos, lightened prejudices, and lightened anxieties over unlikely coups—making it "the single most detailed study of civil-military relation in the world's largest democracy".

Khushmita Dhabhai is a recent admit to Stanford University. She enjoys reading about the exercise of statecraft in peacemaking, and the influence of ethics in international affairs.