Can MGNREGA Haul The Indian Economy Out?

In order to boost the economy, there has to be a special amendment made under Section 29 of the MGNREGA. 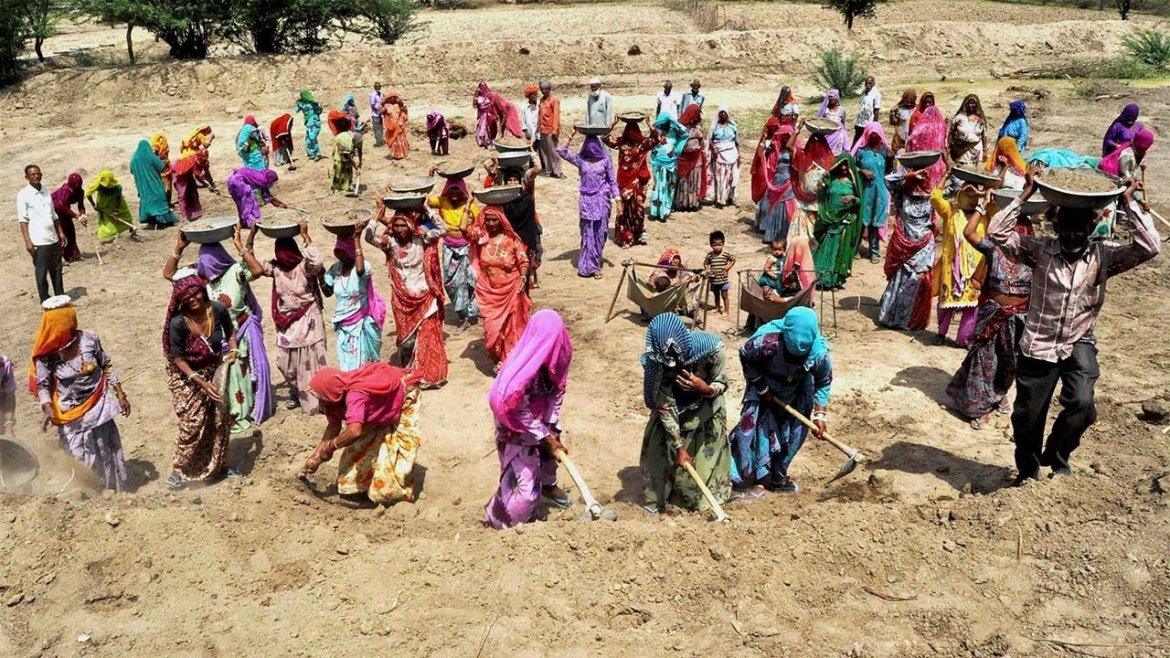 The Mahatma Gandhi National Rural Employment Guarantee Act, under the Narasimha Rao administration, guaranteed 100 days of wage employment to the rural population. Now, in light of the ongoing COVID-19 pandemic, this legal device which guarantees the right to work, can prove to be a key tool in reviving the Indian economy. The major problems that the economy faces, in simple terms, can be broken down into two things – the production hit and the demand hit. The advantage that India holds when it comes to manufacturing is that the lack of advanced technology to assist manufacturing does not pose as a hindrance, as there is abundant scope to refine our human capital that can overcome the production shortage caused by the lack of technology. In my opinion, the rural population represents a large area of raw, untapped potential for expanding labour inputs and reach, serving as a cure to the economy.

Currently, with reference to the sharp decrease in demand, it has to be noted that the main reason for the decrease is the rise in prices caused by the pandemic. This is highlighted through the economic condition called the ratchet effect, wherein the prices rise as the aggregate demand rises, but do not fall back down when the aggregate demand falls. This condition all the more causes a lag in consumption due to the dwindling incomes of the rural population. This problem faced by the economy, due to the decrease in consumption, could be solved only through a boost in demand. The boost in demand can, then, only be induced by increasing the income levels of the poorer sections of the society, starting off from a boost to the basic essential sectors, before the needs are diversified.

One must understand here that, in most cases, manufacturing requires a lot of effort by non-skilled, mechanical labour, which can be fulfilled in the rural regions. The idea here, is that not only will this be cost effective, due to the vast untapped labour force available, but also help circumvent the precautionary measure of social distancing in light of COVID-19, as the spread of the virus is low in the suburbs. MGNREGA has a division of projects in a 60:40 ratio (unskilled labour: skilled labour). Now, this can be an ideal way to address the issue of educated unemployment which runs rampant in India. Technically skilled labour can be used to take up services related to data collection, cloud computing and so on. This, in fact, can boost not just the employment, but the demand to supplement consumption as well. Thus, an overview of this policy deems it plausible to tap into the rural market using MGNREGA, that can assist in raising the income levels.

How would this basic idea be implemented, in practice? To answer this, we need to first look at the various classification of projects in MGNREGA. Basically, the projects under MGNREGA are classified into four types:

Under the existing categories, the scope of manufacturing does not entirely fit. I would suggest the creation of two new projects in regions where facilities are set up, to help the shift of manufacturing to rural regions.

Now, with these two plans in order, to handle the two major problems of health and transport, the next problem and possibly the biggest would be the legal classification of such manufacturing activities. Here the issue is that these manufacturing activities per se, do not fit the asset creation classifications under the existing four classifications of the MGNREGA. Hence, in order to boost the economy, there has to be a special amendment made under Section 29 of the MGNREGA, to change the mandate under Schedule 1, in order to incorporate such activities. A separate classification of projects is to be made to assist manufacturing and boost production. The technical aspects of the same can be covered under the wages allocated for skilled labour.

The time needed for implementation, however, is a major question. So is the question of the timeframe of bringing the infrastructure to tap into these rural hubs. Fortunately, this is something that can be overcome through the help of public-private partnerships, speeding up the process for the setting up of facilities to aid employment opportunities. Another path to this, would be to use the available labour from surrounding districts brought together under strict health precautions under the supervision of the Gram Rozgar Sahayak and Mistris. These measures, still, do not completely solve the question about the time frame, but it has to be noted that this goal is a long-term commitment that might benefit us by helping us recover from the pandemic. However, under any circumstance, the government should try to tap into and fully utilise the human capital resources that stem from the rural population.

Gokul is a commerce student with a wide range of interests, varying from football to law, economics and international relations. He is an avid MUNner and also likes other forms of public speaking like debates and culturals. He believes that knowledge supersedes all.