India's Confused Pillars Of Democracy: Is The Judiciary Separate From The State?

The courts must be held as part of the wider ambit of the ‘State’. 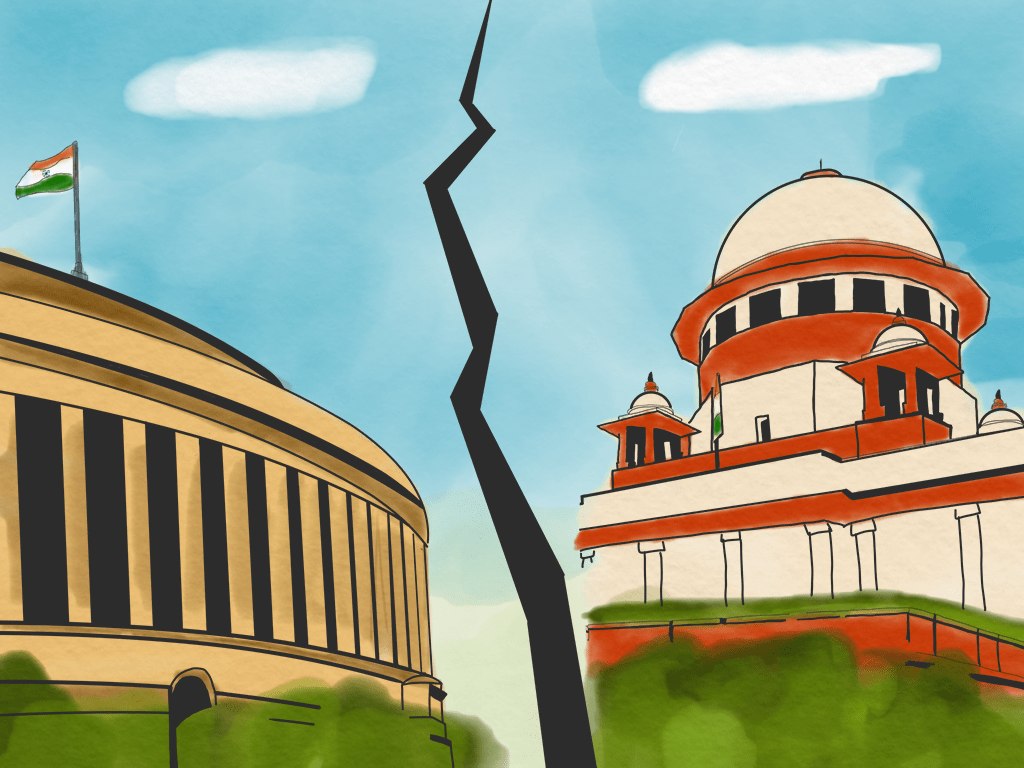 In Part III of the Indian Constitution, which is known as its Magna Carta, are enshrined the fundamental rights of every citizen of India. It is the State’s duty to protect these rights and in case of a failure on its part, the aggrieved citizen can claim their right by filing a writ petition under Article 32 or 226, thereby warranting a judicial remedy.

This brings us to a fundamental question – as per Article 12, does the judiciary come under the gamut of the definition of ‘State’? Although this question is under considerable debate, the Supreme Court at various instances has held that courts are not the ‘State’ while discharging their judicial functions, but may be considered so while exercising ‘non-judicial’ or administrative functions. It is thus necessary to examine various facets of the argument.

According to Article 12 of the Constitution of India, the ‘State’ includes the Central and State Governments, Parliament and Legislatures and all local or other authorities functioning under the Government of India or within the territory of India. One must note that the mention of these institutions suggests that all of these are capable of protecting the fundamental rights of a citizen.

What can be understood from this definition?

Firstly, the word ‘includes’ indicates that the list is not exhaustive but inclusive.

Secondly, the classification is based on institutional parameters as opposed to functional ones, meaning that that scope of Article 12 is determined by the nature of the establishment and not by the function it discharges.

Thirdly, it is evident than the framers of the constitution deemed it fit to explicitly avoid ‘Union and State Judiciaries’ under the ambit of Article 12 despite making specific references to the judiciary in other articles of the Constitution.

Fourthly, the question over the judiciary’s role stems from the phrase “all local or other authorities” in the definition. However, this is put to rest using two principles of legal interpretation –

One, this phrase must be interpreted in the light of the intent expressed and the words preceding it, thereby implying that the reference is to local bodies and not a judicial body. Two, the statute which defines this phrase is found in Section 3(31) of the General Clauses Act, 1897.

Interestingly, this question was also raised when Dr. B R Ambedkar was presenting an amendment to the draft of Article 7 (now Article 12) on 25 November 1948, by Mahoob Ali Baig Sahib Bahadur, who sought the deletion of this phrase. In fact, the demand was to leave judicial bodies entirely from the purview of Article 12.

But Dr. B R Ambedkar categorically stated that the term ‘authority’ is subsumed within the scope of Article 12; i.e., “every authority which has got either power to make laws or the power to have discretion vested in it”. In fact, the National Commission to Review the Working of the Constitution headed by Justice Venkatachaliah made the following recommendation:

“It is recommended that in Article 12 of the Constitution, the following explanation should be added:- ‘Explanation – In this article, the expression “other authorities” shall include any person in relation to such of its functions which are of a public nature.”

While the status quo of this puzzle depends on the functional activities of the court, several decisions made later point against using functional parameters for including any institution in the definition of the ‘State’.

In PC Garg vs. Excise Commissioners, Allahabad, the Supreme Court had to strike down one of its own rules and observe that if a guideline made by a court is violative of Part III, it can be struck down by a writ petition under Article 32.

The Supreme Court also suggested bringing courts under the definition of ‘State’ to prevent such mishaps in the future. In Budhan vs State of Bihar, the apex Court ruled that basis facts and circumstances, the action of the judiciary is an action of the State under Article 12. Furthermore, in AR Antulay vs RS Nayak, it categorically held that if the rules of any court go against constitutional rights and are violative of natural principles of justice, then it must be rectified by ex dibito justitiae (as a matter of right).

In Naresh Shridhar Mirajkar v. State of Maharashtra, the dissenting judgement of Justice  Hidayatullah argues for the inclusion of the judiciary under the broader ambit of the ‘State’ per Article 12, as it would prevent the judiciary from devising rules that violate Part III.

Another popular argument for the inclusion of the judiciary under Article 12 is the direct allusion made to it in Part III of the constitution under the Right to Constitutional Remedies and Writ Jurisdiction. Since the power to enforce fundamental rights rests with the judiciary, excluding it from the scrutiny of Part III seems trivial.

This is emphatically argued by a doyen of Constitutional Law, H M Seeravai in his book Constitutional Law of India: A Critical Commentary. Since the right not to be “convicted of any offence except for violation of a law in force at the time of the commission” and right not to be “prosecuted and punished for the same offence more than once” come under the review of the courts, it becomes inexplicable if the judiciary is excluded from the scrutiny of Part III.

In State of Kerala vs N.M Thomas, the judgement read, “Not only is the directive principle embodied in Article 46 binding on the law-maker as ordinarily understood, but it should equally inform and illuminate the approach of the Court when it makes a decision as the Court also is ‘State’ within the meaning of Article 12 and makes law even though interstitially, from the molar to the molecular”.

It can thus be inferred that the scope of Article 12 over the judiciary is well-established pertaining to cases under Part VI, while those under Part III are still ambiguous about the judicial system being a State.

This can be further inferred from Article 36 of Part VI which states that for the purpose of interpreting Part VI, the definition of ‘State’ which shall apply will be that of Part III, thereby further contradicting the application of Article 12 on the judicial system based on functional parameters.

To do away with the interpretational hurdle faced by our legal system, the courts must be held as part of the wider ambit of the ‘State’. Given the logical fallacies, it would be wise for the court to consider the NCRWC committee’s recommendation regarding this matter, thereby putting the ambiguity to rest.