Smiles on their faces, the three men approached the gallows. The Indo-Israeli relations are often overlooked and underestimated. 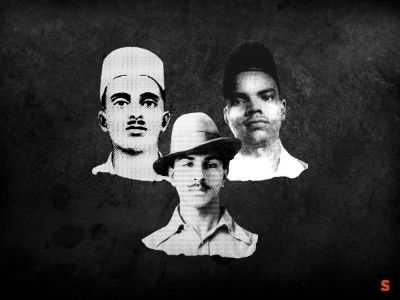 The atmosphere outside the Lahore Jail was tense. A fearsome dust storm had just settled, and the authorities were preparing for what would be one of India’s most infamous executions. No magistrate at the time was even willing to supervise the hanging, for fear of their lives. The pulse of the entire nation, after all, was with the revolutionaries.

Bhagat Singh, Sukhdev and Rajguru were slated to be hanged that evening. In a trial fraught with lapses, loopholes and deviations, they had been charged with the murder of British police officer Saunders, an act of revenge prompted by freedom fighter Lala Lajpat Rai’s killing.

The British government went out of its way, promulgating an ordinance to expedite the trial. The ordinance was passed neither by the Central Assembly nor the British Parliament. Its only purpose was to hang Bhagat Singh and his companions in the shortest possible time. On October 7th, 1930, the three revolutionaries were sentenced to death by hanging.

On the day of reckoning, a group of British officers approached Bhagat Singh. They advised him to seek a pardon from the British government. Singh’s life would be saved, and any unrest following the hanging would be prevented. Singh contemptuously rejected the offer.

Senior jail warden, Chhattar Singh, was grief stricken. He suggested Singh recite the name of God, in the few hours he had left. Singh however, continued reading a book on Russian revolutionary Lenin, a major influence on his ideology. He remained unperturbed, undaunted.

As evening approached, the three revolutionary heroes—Singh, Rajguru and Sukhdev were released from their cells. “Inquilab Zindabad!” they cried in unison. Long live the revolution. The chants were soft at first, growing progressively louder as emboldened prisoners joined in.

Smiles on their faces, the three men approached the gallows. The British would soon see how Indian freedom fighters bravely kiss death, they said. The revolutionaries refused to cover their faces with masks. Singh flung his mask at the Magistrate in defiance.

For the last time, the companions hugged each other. “Down with the British empire!” they called. The executioner pulled the lever. Singh was the first to hang. He was followed by Rajguru and Sukhdev.

“I know the moment the rope is fitted round my neck and rafters removed, from under my feet…that will be the final moment," Singh wrote during his time in jail, “With no selfish motive, or desire to be awarded here or hereafter, quite disinterestedly have I devoted my life to the cause of independence, because I could not do otherwise.”