Opinion: We Must Introspect On The Situation Surrounding The Ram Temple 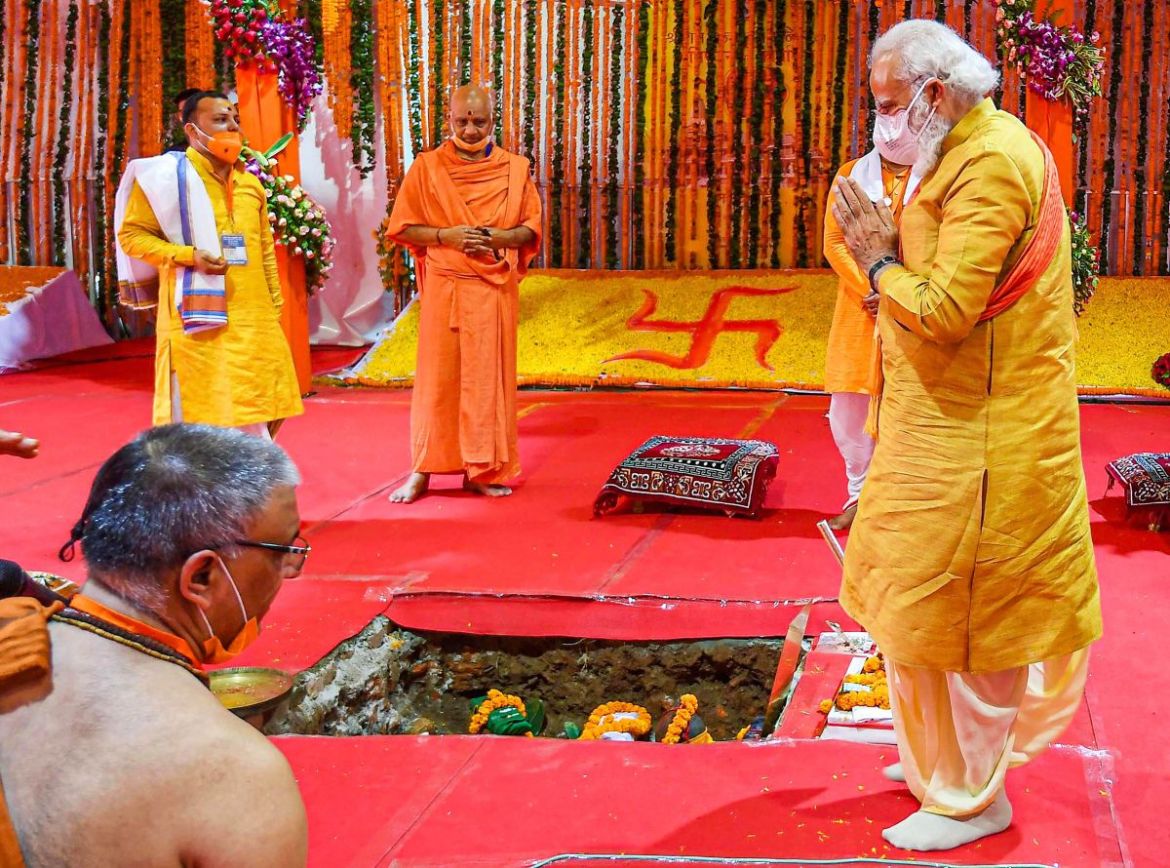 August 5, 2020 was a historic day in India for two reasons. First, it was a year since the special status of Jammu and Kashmir (J&K) was revoked and the state converted into Union Territories; it resulted in it being directly controlled by the Union Government in Delhi and no longer by an elected government under the federal setup. It was simultaneously followed with a year-long (and still ongoing in most districts) internet and communications blockade. Second, it was a day celebrated by most Indians, mainly by (but not restricted to) right-wing Hindu nationalists because of the bhoomi pooja (ground-breaking ceremony) that was held to begin construction of a temple for Lord Ram; a temple being built on a land where a mosque that was demolished by close allies of the Bharatiya Janata Party (BJP) in 1992 lay.

Reaching this point was not easy. It was a struggle that lasted for decades, multiple cases in court, contributions from the Archaeological Survey of India, claims of Muslims invaders building a mosque over a temple etc. The court finally ruled in favour of a temple (mandir) being built on the grounds of where a mosque (masjid) lay till 1992.

But, I have some questions, not only related to the verdict but also to the situation under which certain things have happened, some deep and thought-provoking, some extremely petty but nevertheless, valid.

Would the court have ruled the same if 1992 had not happened?

The demolition of the masjid in 1992 was an illegal act carried out by Hindu extremists. The Supreme Court, while delivering the judgement in 2019, repeated that while the verdict was in favour of the mandir, the perpetrators of violence are still not excused and should face a court. This raises another question.

It is a well-established fact that the demolition was illegal. Even certain right-wing Hindu nationalists in support of the mandir, agree that the destruction that happened in 1992 was unlawful. My question is simple –

While we agree that the demolition was illegal and should have ideally waited for the court to decide what has to be done (as is done in any nation with a functioning legal system), could it not be argued that the court may have been influenced by the fact that the masjid was already demolished in 1992 when giving their verdict in 2019? I find it hard to believe that the court, in 2019, would have ruled the same way (in favour of a temple) if there was a mosque still standing.

Would the court really have sanctioned the demolition of a religious place of worship? Doubtful. It is hence fair to say that the illegal demolition has, probably, to a certain extent, influenced the court's decision. An illegal act of violence, charting a course for a favourable verdict for the people who caused the violence in the first place is disgraceful.

The one-sentence paragraph between the introduction and the first question mentioned that I will be speaking about things that are 'petty but nevertheless, valid'.

The date may be a mere coincidence and I hope I am wrong. But choosing a relevant date is almost never a coincidence. Why was August 5, the one-year anniversary of a blackout and revocation of special privileges in the Muslim majority former state of J&K not only chosen as a date for the bhoomi pooja but it being the very bhoomi pooja that was attended by BJP leaders? I struggle to convince myself that the date was chosen by random luck and not by any malicious thoughts or ideas. Could they have not been a tad bit compassionate or thoughtful before making such a decision that is hurtful to the Muslim community? Petty but nevertheless valid, or so, I think.

Is the comparison of the demolition of the Babri Masjid with the removal of Confederate Statues fair?

What irks me about the arguments made by those in favour of the demolition is the comparison to Confederate statues being taken down under the #BLM banner. The profoundly flawed argument says that brutal Muslim invaders destroyed a temple (which one judge among the four-judge panel in the 2010 Allahabad High Court verdict claimed there was no conclusive evidence of) and built a mosque. Because of that heinous act, the demolition of the Babri Masjid is justified. What supporters of this argument fail to see is that the demolition of the supposed (as per the Allahabad High Court verdict of 2010) temple happened during a time of wars, invasions, and tyranny. The demolition of the Babri Masjid happened in an established and so far, mostly stable constitutional democracy. What is worse, is that leaders of the current ruling party were directly or indirectly associated with the protestors who turned violent and massacred 2,000 people. What separates what our Constitution strives to be, and how the situation was when Muslim invaders demolished a holy temple is that, they were akin to brutes (as were many imperialistic kings of that time, be it Hindu or Muslim) and nothing similar to the stability and order that we should be living in, or rather, should have been living in 1992 under the banners of constitutionalism, the rule of law and civility.

Further, statues of Confederate leaders are taken down because of the principles the people after whom those statues have been made, held when they were alive. White supremacy is not something that anyone, irrespective of political beliefs, should believe in or follow, simply because it is discriminatory. However, the Babri Masjid in 1992 was used by peace-loving Muslims who had nothing to do with the Mughals or any other Muslim invaders. It was used to practise Islam, which is permitted and by no means illegal or wrong, unlike what statues of Confederate leaders stood for. Yes, Muslim invaders may have destroyed a temple during a time when wars and battles were the norms. How does this justify the demolition of a religious place of worship today, in a constitutional democracy?

However, a valid question about the original inhabitants of the land is often asked, but how far back in history should we go?

Has secularism as we know it, come to an end?

On the front of the event being orchestrated and led by BJP leaders, and how it is against the principles of secularism, consider the following:

Let us begin by defining secularism. Secularism is a principle that refers to the separation of State (power) from religion. The Ram Mandir issue has been nothing short of controversy. It has attracted media attention world over for various reasons; both good and bad.

The principles of secularism apply to political parties too. This was reiterated in the S.R Bommai v. Union of India case (1994) in which the court said that religion and State power cannot be mixed because if a political party comes to power by espousing a particular religion, that religion becomes the de facto 'official religion' and the others are relegated to a secondary position. "The encroachment of religion into secular activities is strictly prohibited", said the court. How is this related to the ground-breaking ceremony?

Even if we choose to forget the politicisation of the demolition of the masjid and the court case ever since, one simply cannot argue against the fact that the Ram Mandir bhoomi pooja ceremony was exceedingly politicised. From Ayodhya being draped in saffron to billboards having Prime Minister Modi's, the Uttar Pradesh Chief Minister, Yogi Adityanath's, the RSS (the ideological parent of the BJP) chief's photographs alongside Lord Ram, the city was decked up no less than a banquet hall before a wedding. Why is this relevant?

This bhoomi pooja is no ordinary ceremony. It cannot be compared to a campaign visit of a politician to any other temple just before an election, or an iftar party organised during Ramadan. The bhoomi pooja is the result of decades of court battles, an illegal demolition and finally, a verdict in 2019, that was thankfully accepted peacefully by Muslims.

The pooja created a big stir, and for the BJP to swoop in and take credit for it is against the principles of secularism, especially the points that were reiterated in the S.R Bommai case (w.r.t political parties espousing a specific religion making it the de facto 'official religion' and them encroaching into religious activities). They have quite clearly displayed a religious preference and made their religious beliefs even more evident (than before), and I think that is nothing but a slap on secularism when top-brass politicians (the Prime Minister of the country included) attend and play a central role in the bhoomi pooja of a temple that is associated with the loss of lives, an illegal demolition of a mosque and a legal battle that was gracefully accepted by the Muslims, despite it being against what they wanted.

If the Prime Minister really cared, the bhoomi pooja could have been grand, no doubt, but could have been done in the absence of BJP politicians to at least try and maintain the facade of secularism that has been explicitly mentioned in our Constitution since 1975. As if previous cases were not proof enough, this can be single-handedly viewed as the reason for the end of secularism as we know (not to be confused with the end of secularism itself), not because it is the first instance of any political leader indulging in religious activity but the importance and level of controversy that this specific case has.