Few have taken the effort to explore the politico-theological basis of this malaise called colonialism. 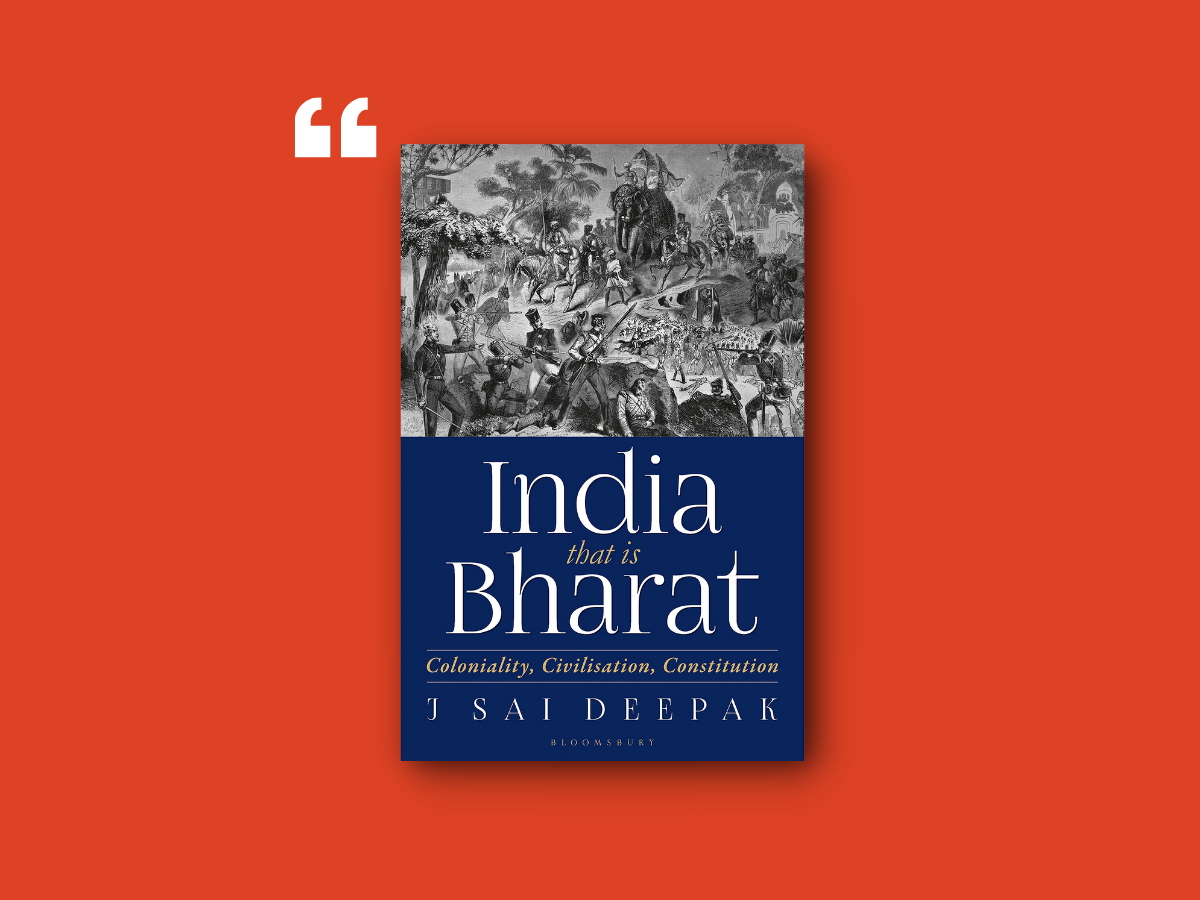 The legacy of the British Raj continues to manifest itself in many ways in the modern independent Indian state. While many have discussed the rapacious tendencies and commercial vengeance of the East India Company and then subsequently of the Crown—from Dr Shashi Tharoor's magnum opus An Era of Darkness to William Dalrymple's East India Company: The Original Corporate Raiders—very few have taken the effort to explore the politico-theological basis of this malaise called colonialism.

This is where Adv. J Sai Deepak's recently published work India That Is Bharat: Coloniality, Civilization and Constitution comes into the picture. A part of a trilogy, this book aims to explore the nexus between racial and ethnoreligious doctrines of Christianity and European colonialism. It also elaborately deals with the origins of ‘universal’ principles like ‘toleration’ and ‘secularism’ and how they are rooted in Protestant reformist theology. He proposes that it is the civilisational imperative of Bharat to explore the school of decoloniality as a tool to reclaim Bharat’s indigenous worldview in the realms of history, culture, nature, development and constitutionalism.

The book deals with three central themes—coloniality, civilisation and constitution. While understanding the idea of a colonial consciousness, it is important to understand certain first principles. To quote Sai Deepak himself, "Colonization is the process, colonialism is the policy and coloniality is the mindset or the thought that underpins or drives colonialism." Relying on the works of renowned scholars like Argentinian semiotician Walter D Mignolo, Jamaican philosopher Sylvia Wynter and Peruvian sociologist Anibal Quijano, the author eloquently presents the model of decoloniality through the prism of American colonial experiences. He further explains how the very root of Euro-centrism and European colonialism was the ‘age of discovery’ in 1492 where Christopher Columbus was commissioned to ‘discover’ the non-Christian world.

The very mission of colonialism of "God, Gold and Glory" affected the very agency of the indigenous people. It was thus, the ‘White's Man Burden’ to civilise the ‘infidels’. Thus, the book shows how the conversion to the European way of life by the natives of Latin America and even large parts of African was not merely a matter of volition but a necessity to survive the wrath of the coloniser and climb the new Eurocentric social ladder.

The connection between the Age of Reason or the Enlightenment and coloniality is noteworthy. From the writings of Locke (A Letter Concerning Toleration) and Kant (Toward Perpetual Peace) on ‘toleration’, one can systematically understand how inspired these ‘rational’ thinkers were by the Protestant Reformation prevailing in the 18th century.  According to Mignolo, the universalisation of secularism and liberty was born out of this intellectual movement which had a politico-theological framework, forcing the indigenous civilisations to redraw their understandings of political landscapes refashioning their lives on the "anvils" of European benchmarks.

Coming to the idea of development, he delves deep into the works of Arturo Escobar and how the modern European notions of development have had disastrous effects on the indigenous templates of the same. The idea of a donor-recipient system of aid essentially made the independent recipient state ever dependent on the donor state. This acceptance of aid and loans came with a lot of benchmarks that the recipient states had to meet which could also mean giving up their native way of life.

In his book Clash of Civilizations, Samuel Huntington postulates how the balance of geopolitical power essentially revolves around the clash of the five or six civilisations which exist today, naming India to be one of the six. Further advancing on these lines, Adv. Deepak explores the idea of civilisation with specific reference to India, expounding on how coloniality as a mindset among both the coloniser and the colonised undermines the level playing field that Bharat as a civilisation deserves in the world order.

There are four basic questions the author tries to answer: How has the European treatment of India as a colony been different from other such colonies? Has India acknowledged this tryst she had with European colonialism? In the case of India, will a decolonial framework work better as a remedy to its colonial experience? Will India be conceived as a nation or civilisational state if this decolonialisation is to happen?

Another interesting avenue explored is the Constituent Assembly debate behind the ‘namakarana’ of the modern Indian state regarding the nomenclature used in Article 1 which strikingly resembled the previous chains of thoughts as discussed before. This cultural purport given to the nomenclature of Article 1 entails a concept called "civilisational nationalism" which our forefathers cherished and made a part of our Constitution.

The Govt of India Act, 1858 sowed the seeds of the Indian constitution. Exploring the various debates surrounding this act in the British Parliament, Adv. Deepak again portrays how influential was the role of the ecclesiastical class in drafting of this legislation. The Nationalist movement gave some steam for the Montagu-Chelmsford Reforms leading to the Govt of India Act, 1919. A glance at the 1919 Act, however, makes one infer how deeply it was etched in the narrative of the "civilising mission" of the coloniser despite the demands for self-government.

Intriguingly, discussed in the second reading of this Act in the British Parliament was the reference to Bharat's membership in the League of Nations in 1919. Adv Deepak traces this to source of origin of the League to the Paris Peace Conference of 1919-1920 where we again find the further universalisation of Eurocentric concepts like "Standard of Civilisation" and "nation-state" as the conditions required for colonial societies required to meet to be part of this "global order". Discussing how the League of Nations and its formation had an impact on the polity of Bharat, Adv. Deepak shows how the Eurocentric ideas was used in the shaping of the Govt of India Act, 1919.

India That Is Bharat is a thorough and well-researched book with a treasure trove of primary sources on colonialism, decoloniality and civilisation. Agree or disagree with him, Adv Sai Deepak has given us a lot of food for thought!