Shaheen Bagh, One Year On: Dissent That Lost Direction

The Shaheen Bagh narrative was weak and flimsy, easily hijacked by forces with interests neither in dissent nor in democracy. 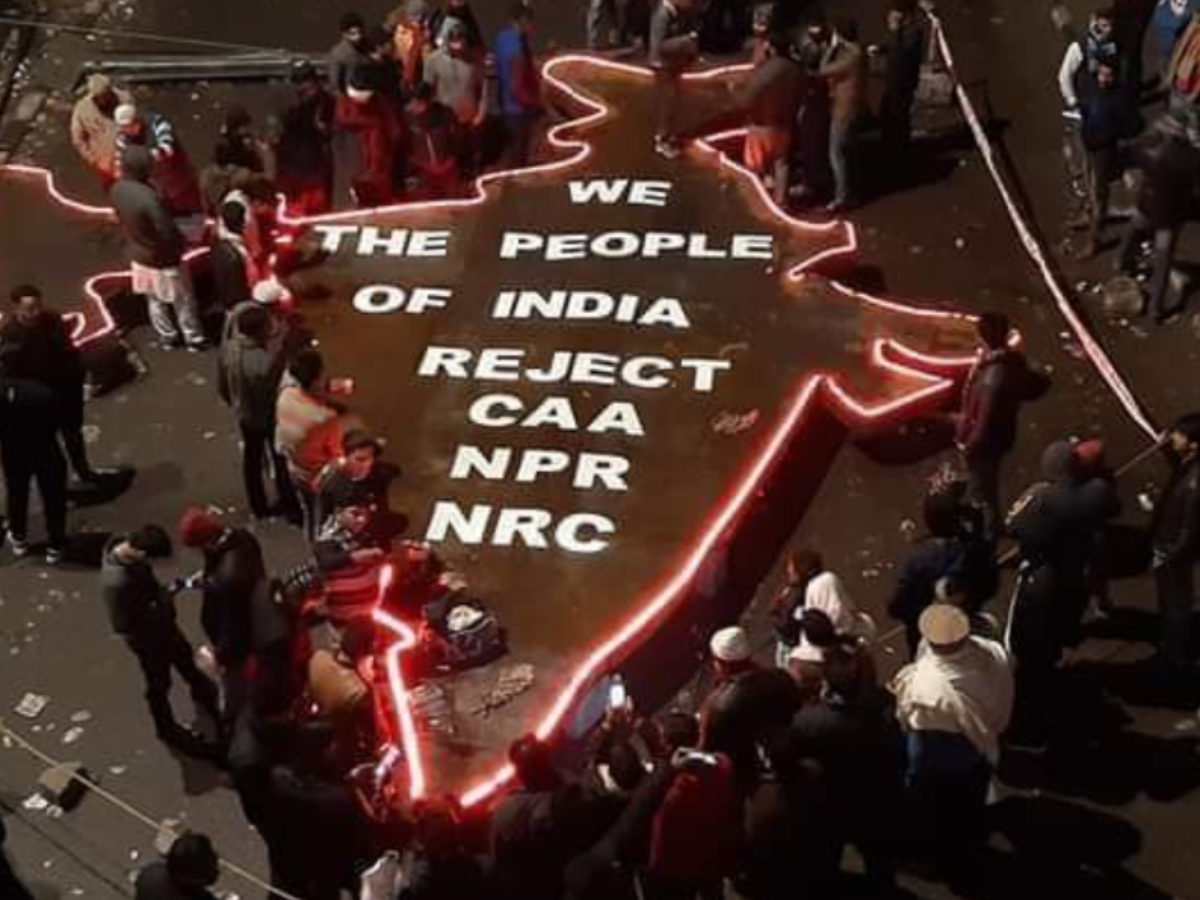 On 15th December 2019, four days after the contentious Citizenship Amendment Act was passed by the Parliament, a group of around fifteen women assembled at Shaheen Bagh, a non-decrepit locality of South-East Delhi, in protest against the new law. The indefinite sit-in agitation, led primarily by Muslim women, grew rapidly in size and significance. It was not long before the dadis and nanis of Shaheen Bagh, blockading the highway as they huddled together braving bitter cold and political pressure, caught the fascination of national discourse.  One of Delhi-NCR’s important arterial roads came to be cordoned off, shops were shut down and vehicles rerouted to make way for large tents to shelter the growing crowd. In addition to this, a model-replica of India Gate, a library, and a 35-foot iron-made map of India, among other things were raised in the vicinity.

In the face of a muted media and a failing opposition, Shaheen Bagh came to be seen as the epicentre of the people’s movement - the sole voices who were ready to speak out against what they saw as unconstitutional legislation, police brutality and majoritarian rule. Artists, intellectuals and academia hovered around, hailing the protesters as protectors of the Constitution.

Over time, however, as public awareness on the CAA increased, counter-voices emerged, and indignation of locals who were blocked from accessing schools, colleges and hospitals grew, the narrative around Shaheen Bagh began to change. Things finally came to a head when the protesters seemed to politicise and belittle the nation’s struggle against the coronavirus pandemic, insisting that they would continue to gather, lockdown or no lockdown.

After 101 days of protest, on March 24th, the Delhi police finally dispersed the crowd, bringing an end to the agitation. Shaheen Bagh’s image was one of a non-violent agitation - for the people, by the people. It was a mass movement, with no guiding leader, no reference point and no face at the helm, as was noted even by the Supreme Court. However, this very feature became its core undoing, making it impossible to engage with. When residents spoke out against a major hospital being blocked off by the protesters, the police did not know whom to approach. When the Home Minister called for a delegation from Shaheen Bagh to discuss their concerns with him, the protesters answered that if they were to meet him, all of them, in hundreds, would meet him together. Shaheen Bagh demanded nothing short of repealing the CAA, and a complete roll-back of the idea of creating a National Register of Citizens (NRC). They claimed that the two would be used as instruments to strip Indian Muslims off their citizenship, disenfranchise them, and drive them out of the country - an unfounded narrative of fear-mongering that had been relentlessly peddled by the opposition and several other groups.

It is true that there are genuine grievances that the CAA fails to address, and that there were grave excesses on the part of the state in handling the protests that followed. The police’s crackdown on students in universities like Jamia Millia Islamia and Jawaharlal National University (JNU) was unacceptable, even in the presence of evidence and accounts that may suggest wrongdoings on both ends.

The CAA, which expedites the granting of citizenship to refugees escaping religious persecution from three neighbouring countries of Pakistan, Bangladesh and Afghanistan, leaves out persecuted groups within the Muslim community from its ambit. The Ahmadiyya and Shia groups for instance, have been systematically disenfranchised in Pakistan, with the Ahmadiyyas even being stripped of their identity as Muslims by the Pakistani Constitution. The Ahmadiyya movement finds its origins in Punjab. The culture of the Shias of the subcontinent is one that is intrinsically Indian. The contributions of Shia rulers like the Nawabs of Awadh to dance, music, art and architecture are deeply entrenched in the identity of cities like Lucknow. To suggest that they, being Muslims, could perhaps find refuge in other countries like the Islamic Republic of Iran is a dangerous insinuation that they belong more elsewhere, and that India doesn’t owe these communities the same obligation it owes other groups who happened to find themselves on the wrong side of the border post partition.

Had Shaheen Bagh raised such concerns with clarity, perhaps they could have been addressed. Instead, the protests amplified the baseless rhetoric and fear of alienation, exclusion and deportation, ultimately losing objectivity of its goals. As the public became more informed of the provisions of the CAA, it became clear that the Act alone, offered little scope to justify mass protest. Supporters of the movement conceded, eventually, that India owed a moral debt to its own people who had endured decades of persecution. The CAA was no longer an issue, but it was the unholy nexus that it formed along with the NRC, by way of which only illegal immigrants of one community would be excluded and sent to detention camps.

The Home Ministry made attempts to quell these fears, putting out statements that clarified that the NRC process would accept a range of evidence, including witnesses and community verification. The highest voices in the establishment, including the Prime Minister, stressed repeatedly that the provisions, or even the idea of creating an NRC had not been, and would not be, tabled in the Parliament in the immediate future. The protests then turned on the National Population Register, a simple census exercise, which required no documents, and had no connection to the question of citizenship. Its narrative weakened and its goals blurred, the agitation gradually become less of a movement to preserve constitutional values, and more of a toxic hate campaign.

More radical elements began to find their way into the movement. Sharjeel Imam, a primary organiser of the protest was seen making an inflammatory speech, calling upon Muslims to block Assam off from the rest of the country.  Children were made to call for the Prime Minister’s killing, and crude comparisons were drawn between the ruling dispensation and Hitler’s Germany. The efforts that Shaheen Bagh had made initially, to bring members of all communities under its tent, rapidly diminished. The same agitation that held a widely publicised session to show solidarity with Kashmiri Pandits began to echo with the slogans of “Azaadi”, the chants that were issued from every mosque when half a million Pandits were made to flee the Valley. The protests became a polarising issue.Forces overseas that have long wished to write the epitaph of Indian democracy scrambled to glorify the protest at Shaheen Bagh. Phrases like “Hindu majoritarianism”, “systematic persecution” and “fascist rule” were, without fact or justification, thrown about the editorials of foreign newspapers that carried glowing accounts of the protest. Even recently, Time magazine listed Bilkis Bano, an 82-year-old woman who protested at Shaheen Bagh, among its 100 most influential people in the world.

In India, however, the story was changing. The protesters refused to yield to the concerns of school buses and ambulances being blocked, ignored invitations to engage in dialogue, came to no consensus after prolonged efforts by interlocutors, and seemed generally devoid of further direction. Disenchantment had begun, and it was only amplified when large gatherings were disallowed courtesy the pandemic, but Shaheen Bagh remained largely unmoved, as did the many little Shaheen Baghs that continued to sprout around the country. While protestors assured the media that they would respect the Government’s directions and cap their number at fifty, reports on ground revealed that hundreds would gather at the site as the day progressed.

At first unable to address the Shaheen Bagh problem, the Delhi Government eventually invoked Section 144, and the police dispersed the crowd and cleared the site on March 24th. On October 7th, the Supreme Court ruled that public places cannot be occupied indefinitely to stage protests, bringing a close to the Shaheen Bagh saga. While dissent goes hand-in-hand with democracy, such protests must take place only in designated spaces. The fundamental rights to freedom of speech and expression, and to assemble peacefully without arms, the court said, must be exercised with reasonable restrictions, keeping in mind public order and the integrity and sovereignty of the country.

The Court also criticised the authorities who were lax with the issue of encroachment of public spaces, neither making attempts to negotiate with the protesters, nor taking action to disperse them. Shaheen Bagh was, and will remain, significant in India’s democracy. It sent the message that the number 303 holds good only in the haven of the House, and that the Government will have to make the effort to inform, engage and address the concerns of the public in matters of legislation, one that is further emphasised by the growing outrage against the farm and labour reform bills.

In the context of its own intent and demands, however, the Shaheen Bagh narrative was weak and flimsy, easily hijacked by forces with interests neither in dissent nor in democracy. Later developments, like fifty Shaheen Bagh protestors joining the BJP, also raise questions regarding what the protests really intended to achieve. The motivation, it seemed, was neither to repeal the CAA, nor to roll back the NRC, but simply, to keep the protest going, the hate spewing, and the city hanging in a perpetual state of limbo. Ultimately, Shaheen Bagh was not clear on why it started, what it wanted, and therefore, when to stop.