The story of NT Rama Rao is one that must be told and retold—such was his aura, such was his daring, such is what he achieved. 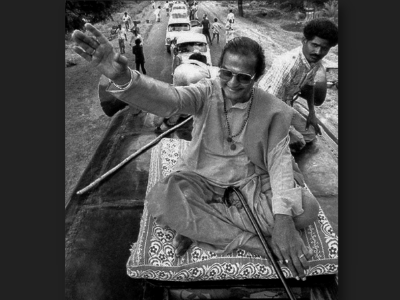 An iconic photograph of NT Rama Rao while campaigning for TDP's first election in Andhra Pradesh, for which he missed attending the marriage ceremonies of his two children

Popularly known as NTR, NT Rama Rao had turned 60 in 1982. With over 290 films to his credit, NTR was already a towering legend of the Telugu film industry.

Most notable were his roles as gods of the Hindu pantheon, even earning him a place in prayer halls across Andhra Pradesh, and the title ‘Devudu’, or God.

In the same year, politics in the state was undergoing an upheaval. It began with a ‘private’ visit by the then General Secretary of the All-India Congress Committee, Rajiv Gandhi.

At the airport, he was greeted by the Congress Chief Minister of the state, T Anjaiah, along with a crowd of cheering party-workers.

Rajiv Gandhi was furious at the political intrusion into his personal visit, calling the elderly Anjaiah a “buffoon” in the presence of his entire cabinet. Shortly after, in February that year, Anjaiah was sacked by Indira Gandhi.

This public humiliation of a senior elected Chief Minister belonging to a weaker section of society would not go down well with the people of Andhra Pradesh.

Anjaiah’s sacking was met with an outpouring of public sympathy. With the state on the cusp of elections, it was clear that the people wanted change.

Change would come in the form of NT Rama Rao, who, with his son-in-law, Chandrababu Naidu, founded the Telugu Desam Party (TDP) on 29th March that year (1982).

With just six months before voting was scheduled to begin, NTR launched his campaign in the state.

A newcomer to politics in a nascent party, he was faced with the uphill task of making inroads in a state which, since its inception had been ruled by the Congress. Most dismissed his campaign as a fad, his success as impossible.

The film star boarded a Chevrolet van fitted with floodlights and speakers, climbing to its top to address crowds. Gloriously christened the ‘Chaitanya Ratham’, this was perhaps the first instance of a roadshow or rath yatra, soon to become indispensable to Indian elections.

Armed with a microphone, NTR began his journey of 7,500 kilometres, across the state.

The response to the tour was overwhelming. Even at places he arrived several days behind schedule, NTR would be greeted by throngs of people, camping right by the roadside, prepared with cots, stoves and utensils.

On tour, he would miss the wedding ceremonies of two of his sons, but NTR was fixed on winning the election.

NTR’s campaign was on the planks of 'atma gouravam' or self-respect and 'jati gouravam', or the honour of the Telugu people.

He likened the insult to Anjaiah as one to the Telugu identity, calling his fight a 'dharma yuddham', a crusade for justice. The government at Delhi, he said, was corrupt and in decline, trying to use Chief Ministers as puppets.

Strong rhetoric, clever strategy and unchallenged stardom made the TDP sweep the election in 1983, winning 201 out of 290 seats, shaking up the national political sphere.

“Comparing what I have achieved this time with the others is not a fair proposition,” NTR would say upon winning, “They have been in politics long before they achieved success. I have done it in nine months.”