The UAPA stands in blatant violation of Article 21. 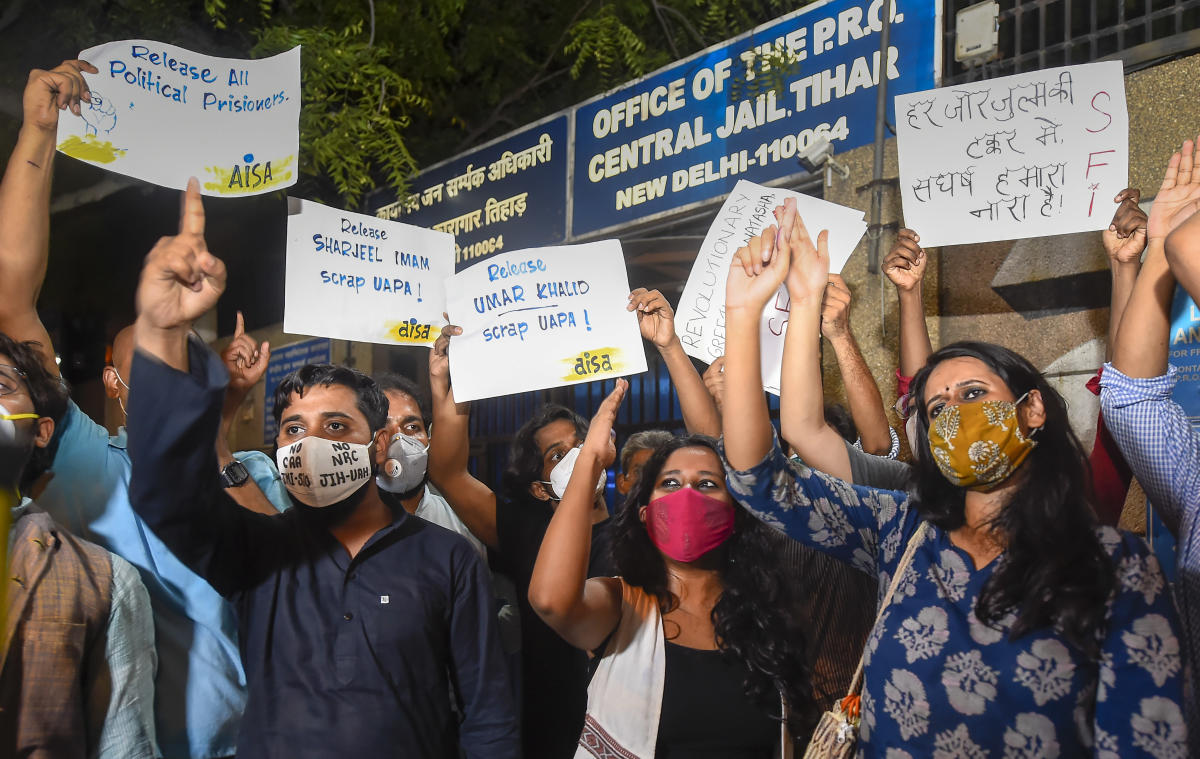 The Unlawful Activities (Prevention) Act, or the UAPA, was enacted in 1967, during Indira Gandhi's tenure as Prime Minister, with the goal of "more effective prevention of certain unlawful activities by individuals and organisations." Since then, the UAPA has undergone a series of revisions, including amendments in 1969, 2004, 2008, 2012, and most recently, in 2019.

Under Section 35(1) of the revised Act, the Centre can designate organisations as "terrorist organisations" by adding them to the Act's First Schedule. Individuals can also be classified as "terrorists" by establishing a Fourth Schedule. This gives the government vast powers to hold and imprison people without charge, frequently before they commit a crime, and to label them terrorists without a trial.

Two petitions were filed in 2019 challenging the constitutional validity of Sections 35 and 36 on the grounds that because of the ambiguity, the sections fail to abide by the ruling in Puttaswamy vs Union of India where the court had held that “the right to life and personal liberty could only be curtailed through the due process of law.” The petitioners have also contended that the concept of audi alteram partem (Latin for 'listen to the other side') was compromised by the lack of a fair hearing.

The Union government has also tabled the National Investigation Agency (Amendment) Bill 2019, which gives the NIA more authority in dealing with terror matters. Only the Atomic Energy Act of 1962 and the Uniform Administrative Procedure Act of 1967 previously allowed the NIA the jurisdiction to investigate cases. With the amendments, human trafficking, counterfeit currency, the manufacture and sale of restricted weapons, cyber-crime, and violations of the Explosive Substances Act will fall under the NIA's jurisdiction. That means the NIA can look into minor infractions reported by states. As opposed to the Assistant Commissioner of Police, who was designated, an NIA Circle Inspector, who could be around 30 years old and have some basic qualifications, is now empowered to advise to the Director General of Police that someone be categorised as a terrorist. This exposes the law to a great deal of abuse of power.

The most recent revisions to the draconian UAPA and the National Investigation Agency (NIA) Act have the potential to be utilised against civil and human rights activists, dissenters, political opponents, and minority groups. To a large extent, successive governments have exploited all such laws. Tragically, the UAPA follows in the footsteps of the others. As a result of these rules, activists working to protect the rights of India's most vulnerable communities, as well as dissenting voices, have been detained.

The Unlawful Activities (Prevention) Amendment Bill, 2019, has been attacked by major political, social, and human rights advocates for attempting to identify individuals as terrorists. The bill was introduced in the Lok Sabha despite strong resistance from the opposition benches, who called it draconian and claimed that in the name of combating terrorism, an individual's fundamental rights could not be ignored.

The social activists, who were working for the benefit of the poor, were allegedly framed in the Bhima Koregaon case by the then BJP-led Maharashtra government and have been imprisoned for more than two years. When the BJP lost power in Maharashtra, the case was quickly transferred to the National Inquiry Agency (NIA) to prevent Devendra Fadnavis' successor from completing an impartial investigation.

This is a glaring example of the Modi administration's use of the UAPA to harass dissenters and protestors. Another example was seen when the Uttar Pradesh government detained Kerala journalist Siddique Kappan while on his way to Hathras to report on the terrible gangrape-murder of a Dalit girl. He was allegedly tied to a cot during his hospitalisation and was unable to attend his mother's funeral.

Justice Anjana Prakash, a former judge of the Patna High Court, stated that 66 percent of the total number of people arrested under the UAPA were charged with conspiracy without any claims of violence. She also said that out of the 386 instances under investigation by the NIA, 74 were for non-UAPA violations and 312 were for UAPA violations. In 56 percent of these cases, she added, the NIA has been unable to file charge-sheets, which means the defendants are still being held in jail. The data clearly indicates a dangerous pattern which has no place in a democratic society.

The Court has very rightly observed in People’s Union for Civil Liberties vs Union of India that it will be self-defeating if human rights are compromised in the fight against terrorism. The severity of the penalties imposed by these regulations, as well as the wide range of acts they cover, are highly concerning. They often embrace a wide range of nonviolent political action and stifle contrarian, dissident intellectual or political ideas under ambiguous and nebulous definitions of terror and criminal behavior. Rather than being a tool for ensuring safety and reducing terror, they serve to reinforce the state's authoritarian regime and are being used to secure political vendettas.

The UAPA stands in blatant violation of Article 21 as it encroaches on the life and liberty of people and has been used to circumvent basic legal rights and procedures such as the presumption of innocence, the provision of bail or anticipatory bail, protection from warrant-less searches, seizures, and arrests, time limits on police detention, and the requirement that the state file a charge sheet, among others.

It is the responsibility of the courts to consider such legal issues and proclaim a remedy of compensation for those who have experienced back-breaking and dehumanising circumstances as a result of the nonchalant misuse of these laws. Simultaneously, the charges should be dismissed, and the unjust imprisonment for approximately a year should serve as the basis for bringing criminal charges against the police involved in this heinous abuse of draconian power against the innocent.

Deeksha is a third-year law undergraduate at NMIMS School of Law, Navi Mumbai. She is a part of the Fellowship For Freedom and is the National Coordinator at South Asia Students For Liberty.