The Forgotten Friendships Of Savarkar

Veer Savarkar's equation with other revolutionaries of the independence movement is less spoken of, here are few 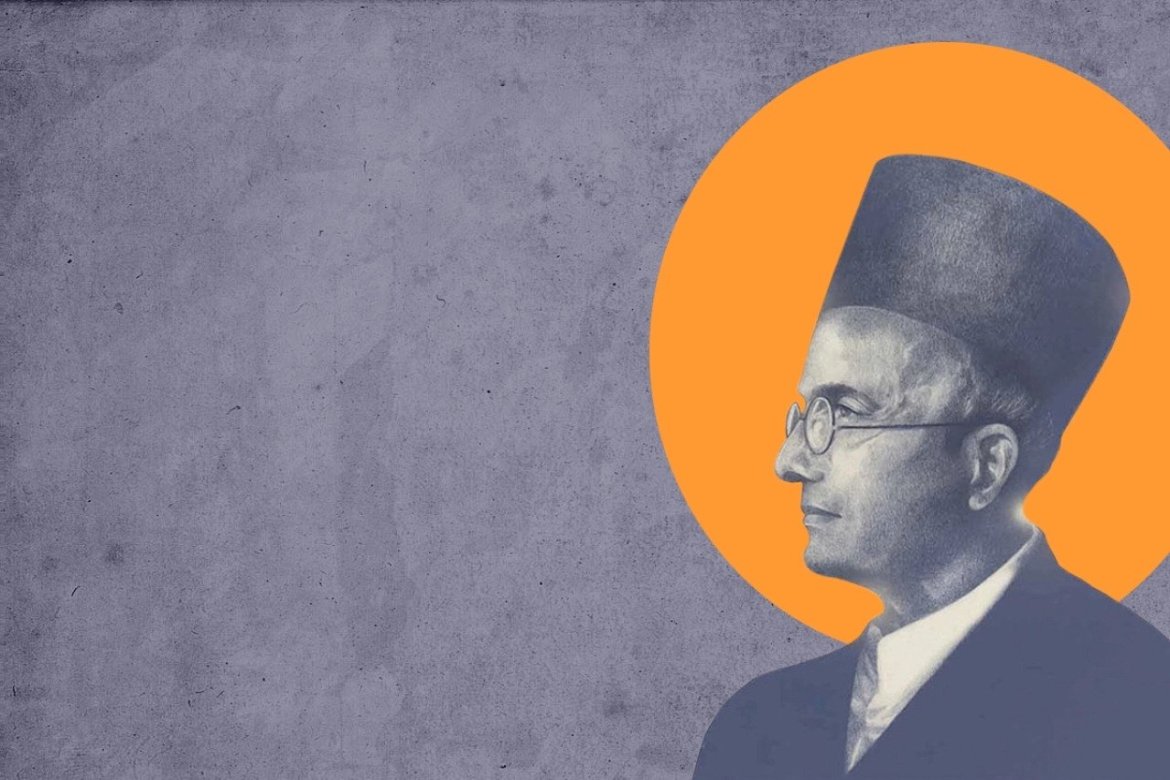 Imagine jumping out of a ship only to be caught again and tortured. Imagine being sentenced to jail for 50 years. Imagine spending six months in solitary confinement, lying amidst your own urine and faeces. Imagine being tied to chains and doing hard labour on an oil mill. Imagine enduring all the hardships of the Cellular Jail in the Andamans – living in unimaginable conditions, gruelling work, scanty food and clothing, occasional thrashing, and yet being denigrated as a man who merely wrote clemency petitions.

A lot has been said and written about Savarkar’s life, his heroic struggle and his brand of politics. Copious amounts of articles and commentaries have been written glorifying and vilifying the man. But rarely do we find references to the relationships he shared with some of the other leaders. This is an attempt to shed light on how Savarkar had been an influence in the works of other leaders.

Quite often, Savarkar gets reduced to a stooge of the British or a traitor who opposed Quit India Movement. While nobody denies the fact that Savarkar was opposed to the movement called by the Congress leaders at the Bombay session in 1942, rarely does one delve into the reasons for which the movement was opposed not just by Savarkar but also by the Communist Party of India, Muslim League and several princely states. The opposition to Quit India Movement was because the Congress leaders leading the movement had no arrangements in place before launching the agitation. As a result, the movement itself turned out to be a leaderless one with all of them getting arrested and the common people facing the brunt of the British. Thousands were killed and injured.

Meanwhile, Subhas Chandra Bose who had escaped from British detention in Calcutta, was reaching out to the axis powers (Japan, Italy, Germany) and was raising the Azad Hind Fauj (Indian National Army) to overthrow the British in India. Vikram Sampath, who had recently written Savarkar: Echoes From A Forgotten Past, 1883-1924, notes that Savarkar encouraged young Indians to enlist in the British Army and get trained so that they can then defect over to Netaji’s INA.

On 21st June 1940, a meeting is said to have transpired between Savarkar and Netaji to “explore the possibilities of cooperation between Forward Bloc and Hindu Mahasabha”. This meeting which is reported to have taken place in Dadar at Savarkar’s residence, is said to have influenced Netaji. Savarkar had suggested Subhas “to not waste time organizing protests for the removal of British statues like Holwell Monument in Calcutta” but instead “smuggle himself out of the country”, reach out to the axis powers and raise an Indian Army of liberation from the prisoners of wars (pow).

The Times of India dated June 24, 1940 carried an article on this meeting. The police also noted a brief account of it:

"Subhas Chandra Bose arrived in Bombay on June 22nd and had discussions with V D Savarkar with a view of exploring the possibilities of co-operation between the Forward Bloc and the Hindu Mahasabha respectively.” (MSA, Home Special Department, 1023, 1939-40, SA dated June 29, 1940, ‘Forward Bloc’).

The above incident is also elaborated in the book The Two Great Indians in Japan by Yukikazu Sakurasawa, a Japanese author and publisher. He mentions -

"it was the private and personal meeting between Netaji Subhas Babu and Savarkar at Savarkar Sadan Bombay that a definite suggestion was made to Subhas Babu by Savarkar that he should try to leave India and undertake the risk of going over to Germany to organise the Indian forces there fallen in German hands as captives and then with the German help should proceed to Japan to join hands with Sri Rash Behari Bose. To impress this point Savarkarji showed to Subhas Babu a letter from Sri Rash Behari Bose to Savarkarji written just on the eve of Japanese declaration of war."

The cordial relationship shared by Netaji and Veer Savarkar and the admiration they shared for each other is evident from the following instances.

Upon Savarkar becoming a free man on June 25, 1937, after remaining confined within Ratnagiri following his release from the Cellular Jail, Subhas Chandra Bose said -

"I am extremely pleased with the release of Mr. Savarkar. He has a brilliant future. I wish he participates in National Congress and strengthens the freedom movement."

When Netaji was touring the Andamans as the Supreme Commander of Azad Hind Fauj in September 1943, he paid tributes to those imprisoned in the Cellular Jail. He printed thousands of copies of the Tamil version of Savarkar’s Indian War of Independence of 1857 and distributed them among the public. He also renamed Andaman and Nicobar islands Saheed and Swaraj islands.

"When due to misguided political whims and lack of vision, almost all the leaders of the Congress party have been decrying the soldiers in the Indian army as mercenaries, it is heartening to know that Veer Savarkar is fearlessly exhorting the youths of India to enlist in the armed forces. These enlisted youths themselves provide us with trained men and soldiers for our INA."

In May 1952, during the dissolution celebration of Abhinav Bharat, Savarkar paid tribute to Netaji by having the bust of Netaji on stage for three days. Hailing Netaji, he said -

"Long live deathless Subhas. Victory to the Goddess of freedom."

In the March-April 1939 edition of the Japanese magazine named Dai Ajia Shugi, Rash Behari Bose, the founder of the Azad Hind Sena (the precursor to Azad Hind Fauj) and a close aide to Subhas Chandra Bose, called Savarkar “A Rising Leader of New India”. Introducing Savarkar he wrote, Savarkar “is heroism, valor, adventure, and epitome of patriotism“.  He further adds -

“To praise him is to praise the spirit of sacrifice”. He is the one who always kept the fire of India’s freedom burning; he is a patriot who risked his life for the freedom of India in the early 20th century and is a founder exponent of the doctrine of cultural independence in the current times“.

He concludes the article by saying “If you agree with Savarkar, you will have political power, and he has a strong position in the Indian independence movement.”

When Savarkar was released from his internment at Ratnagiri in 1937, Rash Behari Bose in his radio talk addressed to Savarkar said -

“In saluting you I have the joy of doing my duty towards one of my elderly comrades in-arms. In saluting you, I am saluting the symbol of sacrifice itself“. He goes on to say “I can see God’s Divine hand clearly behind your unconditional release. You have once more proved your real greatness by propagating the theme that our politics must never depend upon the foreign policy of others. England’s enemy must be our friend. (Free Hindustan, 27th January 1946).

Not many know that Rash Behari Bose was also the president of the Hindu Mahasabha in Japan. The Hindu Mahasabha in Japan was started as a result of correspondence between the two leaders. During 1938-1940 when Savarkar presided over the All India Hindu Mahasabha, Rash Behari Bose presided over its Japan’s branch. The correspondence between the two leaders continued right up to the declaration of war by Japan and the formation of the Indian National Army in Singapore by Netaji.

As seen earlier from the book by Yukikazu Sakurasawa, it is evident how Savarkar was a crucial link between Netaji and Rash Behari Bose. It was on the advice of Savarkar that Rash Behari Bose wrote to Netaji, who was the then Congress President, informing him of the activities of revolutionaries abroad who were working under the Indian Independence League (IIL).

Vikram Sampath in his biography on Savarkar notes that Bhagat Singh was influenced by Savarkar’s book on the Indian War of Independence. Infact, Bhagat Singh had used it as a criterion to recruit cadres into the Hindustan Socialist Republican Army. 'He would even go on to get the second edition of the book published,' Vikram Sampath notes in his book.

Durga Das, the former Chair of the Punjab Legislative Council, in an interview in 1976 talks about his days as a revolutionary when he had worked with Bhagat Singh. He reminisces about how Bhagat Singh asked his fellow patriots to read books that included Bukharin and Preobrazhensky’s The ABC of Communism (1920), Daniel Breen’s My Fight for Irish Freedom (1924) and Life of Barrister Savarkar, which was written by Savarkar under the pen name ‘Chitragupta’.

Savarkar’s another seminal work Hindu Pad Padshahi, a book that would be brandished as communal by today’s champions of communal harmony, was said to have had a profound influence on Bhagat Singh. Historians Malwinder Jit Singh and Harish Jain state while discussing about the famous Jail Note Book of Bhagat Singh that -

"Hindu Pad Padshahi by Veer Savarkar is one book which I would list among those he read thoroughly. May be for him, it was a re-reading as it was also found among the books seized by the police during raids on their hideouts after Sukhdev’s arrest."

Another example that establishes the relationship that Bhagat Singh and Savarkar shared is an incident that occured four years after the latter’s death. Biography of Savarkar titled Atmahuti, written by Shivaramu was released by Mataji VIdyavati Devi, the mother of Bhagat Singh.

The founding father of Communism in India mentioned -

"Mr. Savarkar is one of the few patriots who risked life for India’s freedom movement in the early 20th century. I differ with him on political standpoint, but cannot but respect his spirit of sacrifice mind and courage."

When Savarkar was released from prison, Roy is said to have touched his feet. Both frequently exchanged views and shared stages. Other Communist leaders like EMS Namboodripad, Hirendranath Mukherjee, SA Dange had shared great respects for the man.

To understand Ambedkar’s views on Savarkar, one must read Babasaheb’s magnum opus Pakistan or Partition of India: The Indian Political What is What. Elaborating on Savarkar’s Hindutva and his ideas on Swaraj and pointing the flaws in his approach to the question of Pakistan, Babasaheb says that the alternative provided by Savarkar -

"has about it a frankness, boldness and definitiveness which distinguishes it from the irritating vagueness and indefiniteness which characterizes the Congress declarations about minority rights."

Infact, Ambedkar dedicates a whole section on Savarkar to understand where he is coming from and what he is saying and countering each point of the latter without mincing words, yet without dishonouring the man.

Given these facts, it is clear that despite the similarities and differences in ideological and political affiliations, Savarkar was seen as someone with great intellectual prowess and commanded the respect of leaders cutting across the spectrum.

While one may or may not agree with Savarkar or his views, it is an indisputable fact that he is one of the greatest revolutionaries who ushered in a new spirit of nationalism in India’s freedom struggle.

This article was republished from The Commune with permission. Read the original article here.

The author is a post graduate student of TISS Mumbai and the Deputy Director of Tamilagam Research Foundation.