It was then, in the 1965 Indo-Pak war, that Shastri showed the world what he was made of. 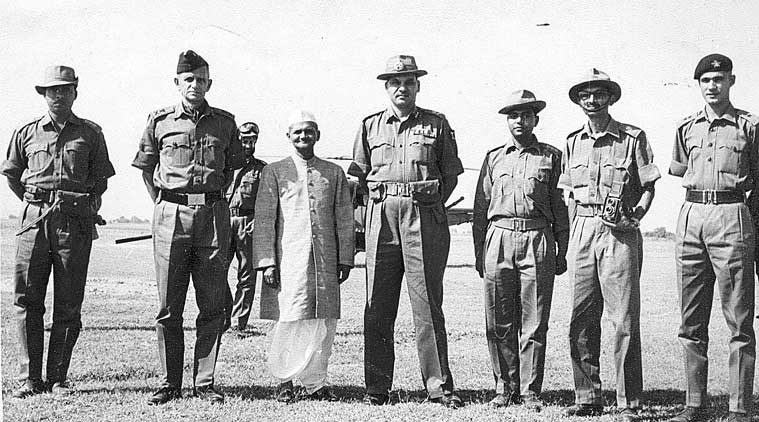 Lal Bahadur Shastri rose to the occasion and held the top office at a time when riots were rife, famines were prevalent and the threat of war loomed large. The enormity of his character was visible even to the blind eye, for he was soft-spoken and simple in demeanour, but his voice reverberated in the hearts of fifty crore Indians whom he led by example.

Born in 1904, on 2nd of October in Mughalsarai, he acquired virtues like courage and patience at a noticeably young age. Why, after all he was a kayastha, the legendary community who were sought by the Mughals in Delhi and Nizams in Hyderabad, by the British government and by independent India for their administrative prowess, efficient recordkeeping and quick wit (even today, most kayasthas serve as administrators in the Government of India and have risen to become Principal and Cabinet secretaries). Hence, the community followed a tradition of being educated in Urdu and Islamic scriptures from an early age. Lal Bahadur Srivastava, as he was known earlier, began his primary education under a maulvi (Islamic scholar), which came to a halt in sixth standard when his entire family moved to Varanasi. He joined seventh standard in Harish Chandra High School, where he dropped his surname to identify as casteless.

Such was young Shastri, short yet strong, subtle yet visible.

As fate would have it, Nishkameshwar Mishra was a teacher at Harish Chandra High School at the time when Shastri enrolled. Owing to his teaching, Shastri began taking a deep interest in Indian history and soon, in 1921, when he was in tenth standard, Mahatma Gandhi and Madan Mohan Malviya, in a public lecture attended by Shastri, called for the masses to quit government schools and jobs. Shastri quit the next day, marking the beginning of the Non-Cooperation Movement.

He became a full-time volunteer at the local branch of the Congress Party and began taking part in protests and demonstrations, for which he went to jail multiple times. He was given the title ‘Shastri’ as part of his degree at Kashi Vidyapeeth, which later stuck to his name and became part of his identity.

By 1928, Shastri had been jailed for two and a half years and by 1937, became the Organising Secretary of the Parliamentary Board of Uttar Pradesh. In 1940 he was again imprisoned for one year for supporting the independence movement. He was made the Minister of Police and Transport in Uttar Pradesh on 15th August 1947. Five years later in 1952, Nehru summoned him to Delhi and made him the Minister of Railways.

Twelve years later in 1964, Nehru died. The question in every Indian's mind was the same - after Nehru who? It was Shastri who answered the call.

As soon as he took office, when anti-Hindi riots flared up in the State of Madras; he pacified it by ensuring everyone that English would go on as the official language. Madras trusted him. Next, he discontinued Nehru’s socialist economic policies and created the National Dairy Development Board to help Amul grow. India was starving at the time and Shastri’s White Revolution was a boon. However, the situation was still tense and an immediate solution was required. So Shastri, the Prime Minister of India, started skipping a meal a week and distributing it to the hungry. He went on air and appealed to his countrymen to do the same. His words struck the right chord and the response was overwhelming. Restaurants and eateries began downing their shutters on Monday evenings and people started calling it the Shastri Vrat (Shastri Fast).

Then one day, by ploughing a patch of land in his Delhi residence all by himself, he sparked the Green Revolution of India. It had the desired response; farmers began to cultivate more crops and M.S Swaminathan was chosen to lead the team of scientists to deliver a long-term solution.

In 1962 under Nehru, India had been pushed back in the India-China war. Shastri had not forgotten the resulting humiliation and expanded India’s defence budget as soon as he came to power. He also chose to build closer relations with Russia.

It was then, in the 1965 Indo-Pak war, that Shastri showed the world what he was made of. In his speech to the Parliament, he stated:

“In the utilization of our limited resources, we have always given primacy to plans and projects for economic development. It would, therefore, be obvious for anyone who is prepared to look at things objectively that India can have no possible interest in provoking border incidents or in building up an atmosphere of strife... In these circumstances, the duty of Government is quite clear and this duty will be discharged fully and effectively. We would prefer to live in poverty for as long as necessary but we shall not allow our freedom to be subverted" - Lal Bahadur Shastri

India pushed back Islamic militants and Pakistani soldiers alike, captured Lahore, and brought it under direct mortar fire while major tank battles ensued in Punjab. When the war finally ended with a United Nations mandated ceasefire, India emerged victorious and Shastri the hero. He met Ayub Khan informally after that, and both formally signed the Tashkent Declaration on 11th January 1966.

It was on that tragic day, under mysterious circumstances, that India’s second Prime Minister was allegedly murdered on foreign land. A grieving nation was not ready to believe that their beloved Prime Minister had died due to a heart-stroke and yet, a post-mortem was not performed.

And then, just like that, as swiftly as Shastri had settled in the hearts of fifty crore Indians, he was forgotten. History textbooks did not do justice to his achievements; his own government failed to glorify the man who started the White and the Green Revolutions of India and saved her from another humiliating defeat at the border. Slowly and systematically, the memory of Lal Bahadur Shastri faded away.

In a Bollywood film Tashkent Files, the circumstances of his death have been revisited.