It was a verdict that would have far reaching repercussions. 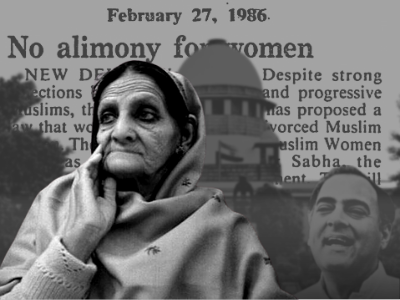 Shah Bano, Rajiv Gandhi, and the Supreme Court of India

In April 1978, a 62-year-old Muslim woman, Shah Bano, filed a petition at a local court in Indore. She demanded maintenance from her divorced husband Mohammed Ahmad Khan, a wealthy lawyer, after he granted her irrevocable talaaq (divorce).

The couple were married in 1932, and had five children — three sons and two daughters. Bano’s petition demanded from Khan a maintenance of INR 500 for her and her children.

As per law, the man was obliged to provide for his wife during the marriage and after divorce as well, if she is unable to fend for herself.

Khan, however, contested the petition on the grounds of the Muslim Personal Law, or the Shariat.

He claimed that he was required to provide maintenance only during the period of iddat after divorce, usually a three-month interval after which the divorced or widowed woman can marry another man.

Family issues, the board said, were to be resolved only under the religious law.

Seven years, and several courts later, on April 23rd, 1985, the Supreme Court of India gave its verdict on the matter.

The Court upheld the validity of the right to maintenance irrespective of religion, even increasing the sum that the High Court had earlier pronounced.

“What difference would it then make as to what is the religion professed by the neglected wife, child or parent?” the Judge, Justice Y.V. Chandrachud asked in his decision.

“That [liability to support a neglected member] is the moral edict of the law and morality cannot be clubbed with religion.”

The judgement pronounced opened with the words, “This appeal does not involve any question of constitutional importance.”

However, it was a verdict that would have far reaching repercussions. Several sections of the Muslim community took to the streets, protesting against what they deemed to be an encroachment on their personal law.

Under pressure from various factions, then Prime Minister Rajiv Gandhi overturned the judgement by passing a law entitled the Muslim Women (Protection of Rights on Divorce Act) in the Parliament.

The maintenance period would be made liable only during the iddat interval, after which the Magistrate could direct the Wakf Board to provide sustenance, if they deemed fit.

Widely criticised as blatant appeasement, Gandhi's moves in the case would result in indignation and turmoil. To reaffirm his support for the Hindu communities, he would swiftly swing, opening the locks at Ayodhya, and with it, another Pandora’s box.

The judgement itself, however, served as a significant first in the recognition of women’s claim for treatment with equality and dignity.