What Fuels The Congress Debacle?

While the saffron party is honing its mettle, a vile uncertainty hovers over the future of the grand old party. 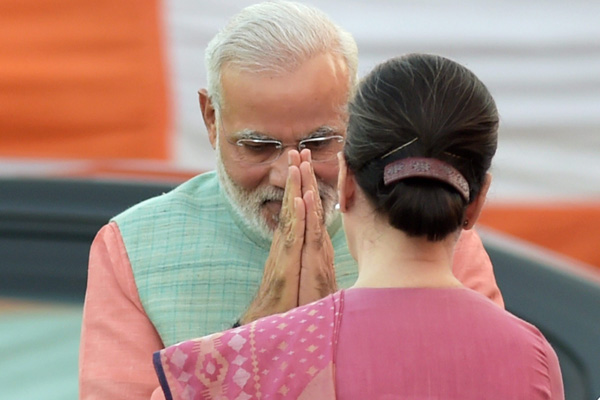 The grand-old ship which dominated the ocean of Indian democracy is drowning in a state of disarray and dormancy. Here, the ship is India’s main freedom winning political entity, the Indian National Congress (INC) whose glory has faded, and its rival, the Bhartiya Janata Party (BJP), is in its heyday.

Instead of resilience and pluralism, the Congress party of today symbolizes frailty and quietism; explicitly falling for saffronised propaganda. Chaos haunts the once most popular political congregation. Instead of forming a vibrant opposition force, internal rivalry, dynastic succession, flimsy organisation and en masse defection has decoupled the INC from its prime role of opposition in Indian democracy.

On the contrary, BJP is expanding its political horizon. Since 2014, the eponymous ‘congress system' (coined by Rajini Kothari in his book The Congress 'System' in India) is waning into alarming voidness. Shock and awe created by Jyotiraditya Scindia’s somersault in Madhya Pradesh has wounded the party to a large extent. Even though a timely truce saved the tottering Rajasthan government, a lack of consensus and coordination in government functioning makes it vulnerable to fall. Political scientists and analysts speculate that the Indian political landscape is becoming infertile for the Congress to counter the BJP-RSS articulated majoritarian theory and pre and post-election skulduggery. If the status quo continues Congress’ extinction is imminent.

The Congress debacle became evident with the 2014 and 2019 general elections, which reduced its lower house strength to 44 and 55 respectively. With governments merely in four states and coalition partners in two, the old behemoth is living in lost glory. The first presage of decay was manifested in 1967 when prominent figures lost elections and internal democracy ceased to exist.

The ‘mandir-mandal’ upheaval refashioned Indian politics, giving birth to new elements, wrapped up in a Congress vote bank drain. Governance characterized by depravity and opacity exhibited in the United Progressive Alliance (UPA) 2.0 diminished its support base to an unprecedented level. Along with endogenous factors, the rise of a unique combination of ‘Moditva and Hindutva’ in 2014 unleashing a saffron wave has thrown INC into senile decay.

Equilibrium of multiple factors is crucial to facilitate the smooth functioning of any organisation. Politics being a complex phenomenon, disequilibrium in the employment of these factors can disrupt the normalcy in political activities. Congress party is wobbling in a state of disequilibrium where shattered organisational capacity, leadership crisis, frequent dissidence, and desertion is failing to render a credible alternative to the saffron party.

Debates over leadership change and delay in finding an alternative to replace the Gandhi-Nehru dynasty is shrinking its energy to play the role of opposition. Deep-rooted retrograde practices like dynastism, nepotism and sycophancy are barriers in the INC’s political trajectory. Started by the Nehru-Gandhi family (which produced three prime ministers), the politics of dynastism has penetrated into the culture of Congress functioning. While Sonia Gandhi has been pig-headed to project her son, Rahul Gandhi, as the successor, other politicians like Chidambaram and Ashok Gehlot are rallying to establish their dynasty.

Even when Rahul Gandhi resigned, instead of demanding intact revamp and a chief outside Gandhi-Nehru lineage, the inmates were still clinging on to the family legacy. Political records of Congress presidents from the non-Gandhi background are discouraging as they ended in perdition. During Narasimha Rao’s tenure, Sonia Gandhi stirred anti-Rao sentiments and severed an alternative centre of power in 10 Janpath.

Criticism and disloyalty to the Nehru-Gandhi family are not brooked. Sharad Pawar, an erstwhile Congress stalwart, was defenestrated from the party for questioning the leadership credibility of Sonia Gandhi. Slugfest for the top post (both in party and country) is not seldom in its conduct (Nehru v/s Tandem, Indira v/s Morarji, Sonia v/s Sitaram). In all these battles, most of the Congress machinery stood in favour of the family contestants.

Congress is being accused as a ‘party of sycophants, by the sycophants, for the sycophants’. D.K Barooah, the man behind the most reviled as well as the celebrated slogan ‘India is Indira, Indira is India’ can be considered as the ‘master of sycophancy’. This happens mainly due to the over-centralisation of power.

The mild centralisation streak shown by Nehru veered into outright centralization during Indira Gandhi’s period. Kothari states, “in a sense, the Nehru period was exceptional in India’s history. One that was necessary, but not so normal, but it had its effect on the working of the party system. While Congress gained in strength, Nehru weakened the party by concentrating power in his own hands and through acting as only he could hold the country together”. The corollary was the introduction of personality cult and sycophancy in politics.‍

One sin breeds another - this saying is apposite to the Congress party’s political conduct. Internal democracy ceased to exist with over-centralisation by Indira Gandhi. “Internal elections in the Congress party began in the 1920s under Mahatma Gandhi’s stewardship and lasted till 1973 when Indira Gandhi suspended them”, says Ashutosh Varshney.

The absence of systematic democratic elections and discussions is impairing the party’s morale. Sanjay Jha, a congressman was suspended for writing a letter beseeching change in leadership and limpid Congress Working Committee (CWC) elections. Hardeep Singh Puri, a Union minister described Congress as a “death chamber of dissent, right to expression and internal democracy”. Money power and nepotism outflank talent in Youth Congress elections. "Only those who have a corpus of about Rs 5 -10 lakh can aspire to win the Assembly level Youth Congress elections", one IYC (Indian Youth Congress) office-bearer from Bihar, who did not want to be named, said.

Congress and its machinery failed to combat BJP orchestrated ‘aaya Ram gaya Ram’. Horse trading campaigns and hotel politics have dwindled its number strength and the destiny of Congress state governments. Karnataka and Madhya Pradesh ended in ‘saffron chicanery’. Thirteen and twelve legislators in Karnataka and Goa respectively defected to the BJP (the list does not end with merely two states).

‍Randeep Surjewala taunted BJP’s ‘horse-trading politics’ by amplifying Modi as ‘Mischievously Orchestrated Defection in India’. But why are Congress legislators easy prey to the opposition’s allurements? The answer comprises of a combination of factors. Unlike the BJP, the dearth of an active ideological and organisational network and stable central leadership to inspire and intertwine scattered elements makes them susceptible to enticements.

Adding fuel to the adversity, dynastism, nepotism, seniority emphasis and coterie system exhorts frustrated talents to get out of this retrograde entity. Personal benefits, a craving for power and insipid commitment are also fillip to this iniquitous practice. Stooping to the pressures of seniors and ignoring young talents has led to a joust between the ‘Old Guard and Young Turks’.

Too much dependence on the seniority principle gives the impression of gerontocracy. Ashok Gehlot’s mockery of Sachin Pilot calling him a ‘worthless person’ and frequent snubs incited the latter to launch a revolt against the sexagenarian Chief Minister of Rajasthan. Bifurcation in 1969 diluted its real flavour and critics view it as a bland entity. Further division and constant squabbling in this saffron age are suicidal for the Congress party.

General elections 2019 exposed the bungling election campaigning machinery of the INC. Rahul Gandhi’s ‘Chowkidar Chor Hai’ slogan worked against his own destiny. Rahul Gandhi, being a young face, failed to attain the vote of the majority of 65% of the youth in this country. Policy paralysis incongruent to the aspirations of youth accelerated the rout of Congress in general elections.

While the saffron party is honing its mettle, a vile uncertainty hovers over the future of the grand old party.