Wide Angle: Ayodhya May Not Be The Only Temple Defining The Future Of The BJP

State control of temples isn’t an issue contained to a state. In Uttarakhand, the govt. recently announced the takeover of several shrines. 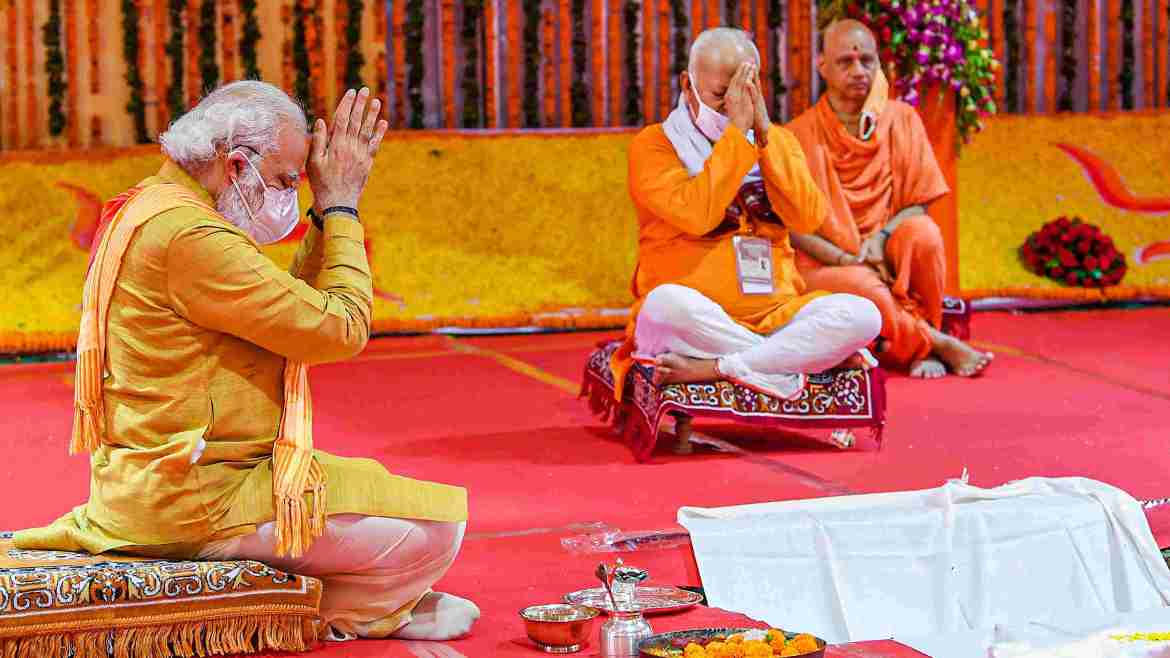 On August 5th, 2020, the foundation stone of the Ram temple at Ayodhya was laid in the presence of Prime Minister Narendra Modi, Chief Minister Yogi Adityanath and RSS Chief Mohan Bhagwat, among others. Described as a “civilisational moment” for India, the ceremony marked the logical, stated end of the decades old Ramjanmabhoomi Andolan, one that had propelled the BJP to rise and, in many ways, shaped the political narrative of India.

How the Ram temple at Ayodhya became so significant to the Hindutva ideology is an interesting premise to explore, with far reaching implications for the present and the future of the ideology, the identity and the party. By all indications of the Prime Minister and the RSS at the time of the bhoomi-pujan, the consensus was that the ceremony marked the victorious end to the Ayodhya Movement. It is important to recognise, however, that this was a movement birthed by factors more complex than 2.77 acres of land. Much beyond Advani, RSS and the politics of it all, the Ayodhya Movement sought to reclaim a lost narrative in history, culture and identity. It sought recognition, acknowledgement and redressal of wounds festering for centuries, wounds that were expected to be addressed in a new-born, independent India, but for Nehru’s almost paranoid fear that the majority community would take over the government post partition.

Political Hindutva as such, has little to do with religious, leave alone spiritual, Hinduism. Those who level this as a charge against Hindutva, however, fail to recognise that Hindutva has never claimed to derive from Hinduism in the first place. Savarkar was concerned with the Hindus as a people, not Hinduism as an idea. After all, his famous essay on Hindutva, asked in its title “Who Is a Hindu?”. Hindutva is an ideology birthed by more contemporary circumstance, not theological diktat. The context that it can claim is at best, historical, drawing from centuries of invasion, oppression and later, colonisation and partition. This explains why, in spite of being heavily religious, states like Tamil Nadu never really took to Hindutva, for they lacked the historical context that other parts of the country had.

One of the few, if not the only, pieces in the Hindutva puzzle, linked directly to Hinduism is the temple. More likely by consequence than coincidence, it was this element that became the driving force of the ideology. Advani began his rath yatra, a chariot procession calling for the construction of the Ram temple at Ayodhya in September 1990. The groundswell support that it received was something even organisers had neither anticipated, nor prepared for. Vajpayee, himself against the yatra, would later write that the “question of building a Ram Temple deeply touches the emotional chords” of the people. Today, the shower of donations towards building of the temple, even in the times of a pandemic and economic stress, suggests that the emotional chord remains intact.

In the same vein, recent issues that have recently gained visibility point to the sustained importance of temples in the political narrative in general, and that of Hindutva in particular. Among them is the long-standing demand of freeing Hindu temples from the control of the state, which in lieu of impending Assembly elections, has yet again, gained prominence. Yet again, the Indian state is forced to answer why a secular state exercises control over places of worship of a single community. The term 'secularism' — a European idea of separation of the State and the Church — holds little relevance in a pluralistic, multicultural society, composed largely by religions like Hinduism and Buddhism that do not envision any single law, institution or state. One of the few areas where it may hold some bearing, would be the independence of religious institutions and the non-interference of the state in them. Ironically, this is where the Indian state ruthlessly steps on the toes of the much cited, but scantly understood idea of secularism.

In the context of the elections, the issue has come to light in poll-bound Tamil Nadu, where the Hindu Religious and Charitable Endowments (HRCE) Act, 1959, allows the state government to take over the administration of temples, and maintain control over them and their properties. Similar laws exist in several states including Andhra Pradesh, Karnataka, Himachal Pradesh, Odisha, Maharashtra, Uttar Pradesh, Kerala and Bihar.

The stated intention of these laws was to better the administration and functioning of the temples, and their unstated intention was, in cases like Tamil Nadu, to dispossess certain communities who were perceived to be close to temples. Among other things, the laws provide for an administrative fee to the government levied on the revenue of the temple, and for the appointment of executive officers by the state for the management of the temple. In contrast, other religious institutions are largely free of such statutory interference.

The results have been grim. In Tamil Nadu alone, over 40,000 temples have been brought under the control of the state, of which over 85% have revenues of less than ten thousand rupees per year. The Hindu Religious and Charitable Endowments (HR&CE) department of the state submitted in the Madras High Court that of the 44,121 temples under its control, 11,999 did not receive enough revenue to even perform puja. Over 37,000 of them do not get enough revenue to be able to appoint more than one individual, who plays all roles — priest, manager, care-taker. Only around 7000 temples, the Department said, where stable enough financially to take care of their own needs, of which only around a 1000 had surplus funds to invest in banks.

Further, the Department reported over 1,200 deities having been stolen from temples in the last 25 years. Of these, a mere 56 have been traced, and only in 18 cases the possessions were actually restored to the temples. In several of these cases, officials in the HR&CE have been involved, accused and convicted by courts.

Indian bureaucracy is reputed for inefficiency, sluggishness, inertia, fund embezzlement and rampant corruption. Government officials running temples are no exception to this trend. It is important to remember, however, that a temple is not a PSU. A PSU can be run, however poorly, even with a lack of accountability. A temple cannot. Aspects of attachment, responsibility and devotion are defining of any place of worship.

State control of temples isn’t an issue contained to a state. In Uttarakhand, the government recently announced the takeover of several shrines, including prominent ones like Kedarnath and Badrinath by the state. In Odisha, the Naveen Patnaik government initiated the process of selling over 35,000 acres of land belonging to the Jagannath Temple. In Andhra Pradesh, a host of cases of desecration of idols have come to light in the recent past, with the image of a weeping priest, cradling the broken head of a 400-year-old idol of Lord Rama becoming yet another symbol of the state’s apathy towards the temples.

Judgements of the courts in cases relating to the Padmanabhaswamy temple in Kerala, or the Chidambaram temple in Tamil Nadu, where the management of the temple was returned to traditional communities show the redundancy of state control over temples. In the case of the return of the temple at Chidambaram to its original trustees, the court observed, “even if the management of a temple is taken over to remedy (an) evil, the management must be handed over to the person concerned immediately after the evil stands remedied. Continuation thereafter would tantamount to usurpation of their proprietary rights or violation of the fundamental rights guaranteed by the Constitution in favour of the persons deprived.” This is an argument that stands not only for the temple in question, but all others brought under state control too.

That BJP governments in several states have not only retained, but also actively strengthened and introduced rules providing for state control of temples indicates that there is inertia across the board politically to effect any of sort of change on this front. Understandably so, for temples are to the state sources of both revenue and power.

Whether seen as religious, cultural, historical or simply architectural, the notion that temples need to be freed from government control is consistent. In electoral democracy, everything, at the end of the day comes down to politics. Perhaps the freeing of temples would yield results politically, much like Ayodhya did. After all, few would pass up the opportunity to be seen as God’s own liberator.