One must not forget, in 2019, Rahul Gandhi chose to skip Mamata Banerjee’s United India Rally, attended by the who’s who of Indian politics. 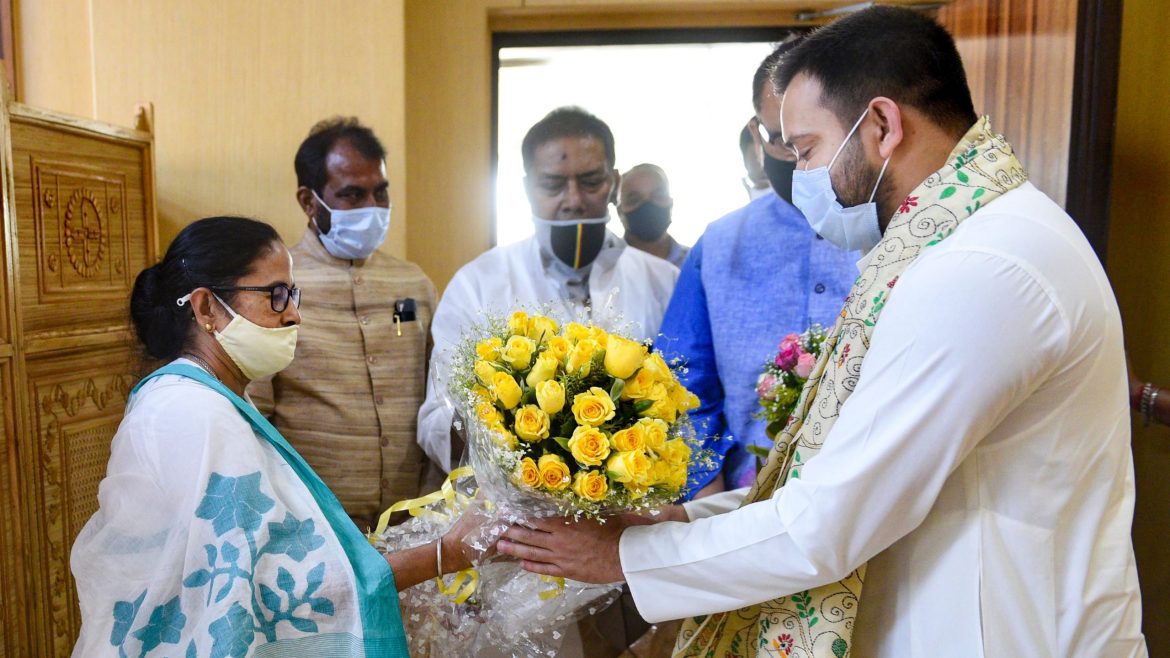 On March 1st, RJD leader Tejashwi Yadav met Mamata Banerjee, pledging his party’s full support to her in the upcoming polls. He was closely followed by Samajwadi Party leader Akhilesh Yadav making a similar announcement. Maharashtra’s NCP, and later the Shiv Sena too, put their weight behind Mamata didi, hailing her as the “tigress” of Bengal.

It is unlikely that support from opposition parties in Bihar, Uttar Pradesh and Maharashtra will dramatically change Mamata Banerjee’s fortunes in Bengal. These announcements, however, remain significant, for they infuse new life and fresh dynamics into the quest for that elusive unity that opposition parties have long sought, but never quite achieved.

Aspirations of a grand alliance against the BJP juggernaut are not new. Be it the 2018 photo-op of opposition leaders holding hands at Kumaraswamy’s swearing-in, or Mamta Banerjee’s United India rally at Kolkata in 2019, India’s opposition has routinely promised a grand gathbandhan, but never really delivered. This time, however, some things may be different.

On most previous occasions, the Congress has remained hesitant to formally join these alliances, even when called upon. In 2019, Rahul Gandhi chose to skip Mamata Banerjee’s United India Rally, attended by the who’s who of Indian politics. Instead, he deputed then Lok Sabha Leader of Opposition Mallikarjun Kharge to speak at the event. The Congress had the stature to claim to lead India’s opposition even as it went into polls independently, and hold their own.

It remains unclear whether the Congress would, today, consider pledging its support to the opposition alliance that appears to be in the works. What is clearer, however, is that the other parties are no longer looking to the Congress to join this alliance, leave alone lead it. Election after election, the Congress has proved to be a liability to its partners, dragging their tally down and bolstering the BJP’s rise. The latest instance of this was Bihar, where the Congress, in alliance with the RJD and the Left, contested a grand seventy seats, winning just nineteen. This is perceived to be as a factor which thwarted Tejashwi Yadav’s chances at winning the election. It is no surprise therefore, that Tejashwi has declared his support for the TMC, and not the Congress.

In spite of being in alliance with the Congress in Maharashtra, the Shiv Sena and NCP too, have positioned themselves in favour of the TMC. With the first signs of open rebellion emerging within the grand old party, a palpable leadership vacuum and consistently dismal electoral performances, the Congress, it seems, is staring at its ouster as the leader of opposition parties.

The electorate, too, has sensed this shift. The rise of parties like Owaisi’s AIMIM and Kejriwal’s AAP in regions far from their home states demonstrate that in the presence of a third alternative on the ballot, the non-BJP voter is likelier to align with them than the Congress. In Maharashtra as well, where the Maha Vikas Aghadi is in power, both the BJP and the Congress seem to be ceding ground to regional players like the NCP.

The concept of a Third front, or a non-BJP, non-Congress coalition is not new. Third front governments under VK Singh, Chandra Shekhar, Deve Gowda and IK Gujral were all marked by political instability and internal conflict. These federal fronts however, never had the numbers to stand on their own, relying on a peculiarly Indian phenomenon of “outside support” from larger parties they had set out to challenge, like the BJP and the Congress. The party providing outside support would not participate in forming the government, but would support it in Parliament, wielding huge authority and veto power over the government in place. Federal fronts in the past, therefore, have spent there short terms doing little more than saving their own governments from factionalism, defections and failure.

In a political system as diverse as India’s, each regional party is birthed by a unique combination of circumstance, ideology, community or caste, relevant to that state, at that point of time. To bring them together would mean marrying contradictory and incongruent views, ideas and priorities. It does not help that looking through the bubbles of their own states and the fawning durbars that surround them, every partner in the coalition sees a rightful stake at becoming Prime Minister.

The result that satisfies all, therefore, is neither the most meritorious candidate, nor the one with the most numbers. Instead, it is the meekest, most inconspicuous and least combative ally who is propped up in the Prime Minister’s place. As seen in the cases of governments under Deve Gowda and Gujral, deliberately seating the weakest member at the helm often only accelerates the fall.

When clashes of party ideology and personal ego threaten to break a federal front apart, the glue that holds it together is hate, and often fear, of a common adversary. While out of power, the spotlight remains on the defeated party. When the Janata Government came to power in 1977, for instance, they invested the bulk of their time and resources in going after Indira and Sanjay Gandhi with a vengeance. The voter had routed Indira from her own constituency, and the Janata Party would have been better served by leaving her in political wilderness, and executing reforms the people had entrusted them with. This, however, was not to be. Soon, Indira Gandhi was no longer perceived as the authoritarian dictator of the Emergency, but as a victim of assault by the State. She won the next election by a landslide, and India’s grandest alliance fell.

In coalition governments, the issue often is, that everyone has an opinion on a matter. In governments composed purely of regional parties, the additional dynamic is that sometimes, no one has an opinion on a matter. The policy and agenda of parties designed by and for the state often has major blindspots in areas like national security and external affairs. In 1991, a minority Congress government under Narasimha Rao could push through economic reforms, while its federal predecessors under VK Singh and Chandra Shekhar could not. The inability of the latter two to resolve the crisis is explained not so much by a lack of consensus and numbers, but simply, by their ignorance.

Similar issues plague the possibility of a grand opposition alliance in India today, if it ever does come through. While the Shiv Sena has been backing the candidature of Sharad Pawar in hushed tones, Mamata Banerjee’s national ambitions are no secret. A non-Congress non-BJP alliance would also require the support of major regional players like the BJD and YSRCP, which for now, remain friendly with the Centre. The basis of opposition unity remains Modi, Shah and their politics.The fact that leaders of Bihar and Uttar Pradesh felt the need to fly into West Bengal, declaring their primary aim to be to keep the BJP out of power, is in itself a victory for the BJP, which till now, was a minor player in the state.

Questions and concerns notwithstanding, the alternative to an incumbent BJP and waning Congress today, appears to be a third, federal front. With 2024 a long way ahead, and many bonds to make and break before then, only time will tell if India will for its first time see a strong Federal Front, or even a weak, fissured one.